Comparing the age of the band (initial demo in 1996) and Teloch’s frequent session work with the who’s who of diehard Norwegian black metal both in studio and live(1349, Godseed, Mayhem, on and on in a variety of capacities) means this band exists either as a creative outlet for stuff he can’t utilize in other groups or a pet project that’s been with him since he started making music (it could go either way, really). Greatest of Deceivers is very much a marriage of black and death metal ideals, though instead of the ‘blackened death’ espoused by so many, this one is decidedly a ‘deathened black,” all the tropes of Norwegian black metal intensified with death metal stylings, intensity, and structure.

To this end, there is little to be disappointed with or be surprised by in equal measure, “Pure Pale Gold” or “Vim Patior,” each showcasing that which defines the album: intensely caustic and occasional dissonant riffing, on again off again blast-beats, and some surprisingly audible and pleasing bass work. The most peculiar and certainly acquired taste of the band are the vocals, while not particularly unexpected or ill-fitting to the music, the mood and texture shifts they plow through do take some getting used to.

“The Worm Is Crowned” takes on a very thrashy vibe and is (pun intended) crowned by guest vocals by Ulver’s Kristoffer Rygg*, providing a clean backdrop beneath which the song collapses in beautiful fashion. Inventive moments like this, however, are the occasional indulgence rather than a regular appearance and truth be told, while only ~47 minutes in length, parts of Greatest of Deceivers can blur together in a sea of blast-happy fury. There is a great deal to be enjoyed, if only for the fantastic bass work that sneaks out in most songs and finds subtle ways to steal each song. Norwegians and bass playing, it’s a heavenly match!

*While I don’t think I’d ever mistake his voice, no information was provided that the voice indeed does belong to him and there seems to be no available documentation saying as much! 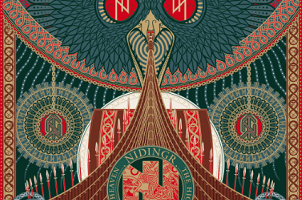