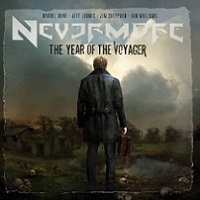 In a career spanning nearly 15 years, this is the first proper visual documentation of Nevermore and true to form, it’s top-notch, supremely-performed and captivating across the board. From strictly a format point of view, Year of the Voyager offers very little that is new, but the editing and spread of songs will force one to keep a close eye (and ear) on the proceedings.

The first DVD consists of a full show shot in Germany in October of 2006. With stand-in guitarist Chris Broderick (currently in Megadeth) dueling with Jeff Loomis, there is plenty of technical ecstasy to go around. Loomis handles the bulk of the lead work, as he should, but Broderick proves to be just as nimble during “My Acid Words” and “The River Dragon Has Come.”

Leaning heavily on the Dead Heart In A Dead World platter, a freshly-sober Warrel Dane sounds like the Warrel Dane of 1995, giving tunes like “Inside Four Walls” and “The Heart Collector” and old jaunts like “What Tomorrow Knows/Garden of Grey” and the totally overlooked “Matricide” the vocal precision they needs. Top this off with a far from typical editing job (lots of effects, quick cuts, more effects for the fuck of it) and this live show is a visual of lot of other bands would be wise to follow.

DVD II is a smattering of live performances through the years, from the band’s successful Gigantour run in 2005, to the normal festival rounds including Wacken (where pretty much everyone uses footage from nowadays) and the Metal Mania festival in Poland. Bonus materials include a candid interview with Dane, all eight of the band’s videos (“Believe In Nothing” still remains as one of the best songs of the decade) and footage going all the way back to 2001 for Century Media’s 10th anniversary party.

2008 will go down in the books as the year of the Nevermore solo project, with Dane and Loomis releasing quality, damn near excellent albums, but Year of the Voyager is a nice little segue going into 2009, where a new studio album is expected. And if we’ve come to learn anything from Nevermore, it’s expect the unexpected. Bring it on, fellas.