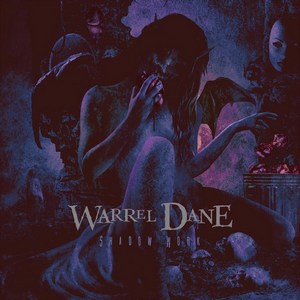 When it comes to heavy metal vocals, the old saying never rang more truthfully and boisterously than by stating that there was only one Warrel Dane. From his unique vocal range and delivery to his darkly poetic and personal lyrics, the metal world suffered a heavy blow last year when his death was confirmed. Whether people learned of him through Sanctuary, Nevermore, or even his solo work, it was an easy conversion into a full-fledged fan. Shadow Work is his last gift for us, and sits comfortably among his other ‘mandatory’ works.

As the cover conveys, there’s something dark and eerily prophetic about Shadow Work. That usual melancholic heaviness that Dane personified bubbles right to the top of each track, with “Madame Satan” coming in as an opener that could rival some of latter day Nevermore’s strongest tracks (and even sees Dane incorporating some more extreme vocals). In fact, the grand and epic tone that much of the album takes does seem to borrow from that era more than any other, with a combination of bleak, thrashy riffing combining with Dane’s twisted vocals, providing a mix of sincere sadness and some scathing wit (exactly what his strong suits usually implied). From the triumphant “As Fast As the Others” to the glum ballad “Rain” to the gargantuan closer “Mother is the Word for God,” it’s a consistently rousing and haunting affair. There’s even time for one more downright crushing cover song, this time its The Cure’s “The Hanging Garden” done in pure metallic delight. Perhaps the impressive part of the whole thing is the level of dedication from the rest of the band to making sure that this swan song was going to be a potent one. The vocals were a mix of final takes and pre-production work, and you’d never know it upon listening. The ability to turn this half-finished product into a reality could have easily taken a turn for the worse, but instead stands as a fitting farewell.

Indeed, the farewell part might be the worst part of listening to this release. To come to terms with the fact that there won’t be any more music from the legendary vocalist is bound to be heartbreaking and bittersweet for many. But it serves its purpose as providing fans with one last, impressive taste of one of metal’s most charismatic and unique vocalists riding out at the top of his game. Long will he be missed.