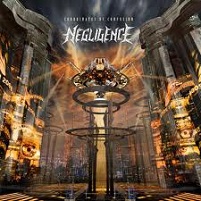 If you are unfamiliar, Negligence is a modern thrash band hailing from Slovenia. There seems to be more new thrash metal bands

popping up these days faster than light speed. Yes, they have hit ludicrous speed. But, enough with the Spaceballs references. The biggest issue is that while some of the newer thrash bands are bringing some exciting music to the table, some are no more than a mimicking of past glories. Where does Negligence fall? Right in the middle.

Coordinates of Confusion is the band’s second album, and this writer’s first exposure to their tunes. Listening to this album, right away it becomes apparent that these guys are fans of the early days of thrash metal. This is a very old-school feeling record, and it’s done very well on that note. Tracks like “Mind Decay” and “Addicted to Aggression” offer up some very ferocious riffage, while songs

like “Shark Attack” come at you with full-on speed without letting up one iota. There’s a good mix of mid-tempo songs and faster-than-a-747 songs on here, but other than that, there isn’t a ton of variety. Which, honestly, should bear no surprises whatsoever. The wheel doesn’t need any re-inventing to lay down a classic-era sounding thrash album. And wisely, Negligence doesn’t jump around stylistically that much.

Performance-wise, this is a very well-executed album. Some tracks do run together, which hurts the album a bit and making a lot of tracks not so memorable. Which is the largest downfall to this record – there aren’t loads of memorable moments. They do happen here, however, but it isn’t as often as it should be. Vocally, there are a lot of similarities to Iced Earth, which works fantastically with the music. It also does add a little bit of diversity, which this album could use more of.

Negligence is a band that has potential, as they obviously can play and are a very tight group. Coordinates of Confusion is an enjoyable album – just not a spectacular one, either. Some sharper songwriting would do the band a world of good, and it certainly isn’t out of the question. A bit more creativity here, a dash of some more memorable riffs and vocal passages, and we’ll have a complete and total winner on our hands. Keep and eye on these Slovenians.