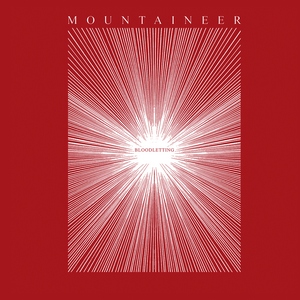 California’s Mountaineer have made a pretty quick ascent through the post-metal ranks, with now three releases since 2017. For some acts, something like this could be start to feel a bit stagnant, but that’s not the case here. Bloodletting consistently showcases the band’s mastery of poignant dreamscapes and doomy rumbles.

There’s a certain feeling of gloomy serenity as the band weaves their way around some of the more introspective parts of Bloodletting. They allow for an escape, per say, into the clouds to sit back and reflect upon things. Take the gentle beginning of “To Those We’ve Said Goodbye,” which mournfully opens up over the course of the first 3.5 minutes or so before any vocals kick in. It takes even longer for much heaviness to come into play, but it’s a beautiful build-up that never lingers or forces things unnaturally. “Ghost Story” operates similarly, with a slow burn allowing for the mood to really set in before tossing in the weighty riffage. That said, when those more metallic moments do come into the crosshairs, the doomy influences shine. Sure, there are bands that hit ‘harder’ but there’s an emotional punch to the riffs. Opener “Blood of the Book” is as good a reference point as any, with some lumbering riffs that feel as if they are stepping on you with their oppression. Much of the singing on the album is also clean-ish, but a few shouts here and there (“Shot Through with Sunlight”) also help to bring up the intensity levels.

Ultimately, Bloodletting works best as an album that you just sit down and partake in completely. There’s a lot to absorb in a single sitting, but it’s worth it to sit down and unpack the atmosphere that the band broods in. Some sweeping beauty exists within the murky clouds, and with Bloodletting, Mountaineer continue to prove they know how to harvest it.