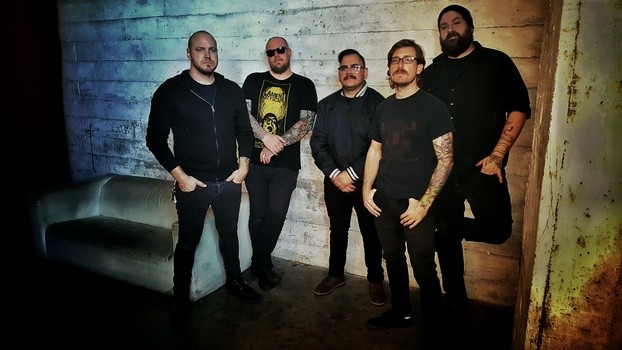 Another month down the tubes, so to speak. Time once again, going into that slope of less daylight per day, prepping us for some added time to sit inside. Or hit every possible concert in the vicinity, as fall has increasingly become the time of year in North America where we are bombarded with tour options. But check out our most recent back of Rapid Fire reviews before you hit the venue…or the couch. This month we dig into Attick Demons, Beelzefuzz, Exalt, Excellion, Fractal Cypher, George Tsalikis, Metal Allegiance, Mountaineer (pictured above), Raw, Reptilian (Norway), Surgikill, Svffvr, Twelve Foot Ninja, Various Artists (The Depression Sessions), and Violent Retribution. 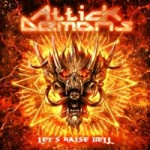 Attick Demons – Let’s Raise Hell (Pure Steel Records)
Celebrating a 20th anniversary, Portugal’s Attick Demons release a new album in Let’s Raise Hell worthy of classic and current traditional metal attention. Elements of Wolf crop up on the guitar hooks and pounding tempo choices within “Adamastor” while “Lights Out”/UFO nuances come up on “Glory to Gawain”. Pumping bass play and animated high heroic melodies will primarily put these 9 songs in the hearts of Iron Maiden rivetheads – especially given Artur Almeida’s uncanny resonance to Mr. Air Raid Bruce Dickinson himself. Many who yearn for a follow up in the Somewhere in Time/Seventh Son of a Seventh Son vein, Attick Demons could be your new ticket to ride. – Matt Coe (Attick Demons official website) 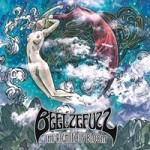 Beelzefuzz – The Righteous Bloom (The Church Within)
Maryland retro-metal or doomy-oriented psychedelic hard rock – Beelzefuzz are the real deal in terms of transporting the listener back four decades (or more) on this The Righteous Bloom full-length. Be it through guitarist Dana Ortt’s soaring, bluesy Slough Feg meets Jethro Tull-oriented vocal melodies, or the pounding bass and consistent drum grooves wrapped around delicious heavy riffing that rocks, songs such as “Nazriff”, the bluesy / swanky “Within Trance”, and earth-shaking doom-licious “Dying On the Vine” beam and shimmer. Understandable why they gain appeal from the older generation – and probably impress on live accords. – Matt Coe (Beelzefuzz on Facebook) 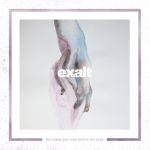 Exalt – The Shape You Took Before the Ache (Good Fight Music)
Rightfully hailed as part of the next generation of metallic hardcore alongside Code Orange and Harm’s Way, Ontario’s Exalt uphold their end of the bargain with The Shape You Took Before the Ache. Lots of meat and angles to these songs, working around the meathead bent that some hardcore bands fall prey to. The searing groove and dissonance of “Martyr Alone,” or the chunk-and-balls approach of “Leave Them All Behind” give off the impression Exalt have done their ‘90s hardcore homework. Furthermore, big ups for the clean vocal drop-ins on “Worship.” The future of metallic hardcore is in good hands. – David E. Gehlke (Exalt Facebook) 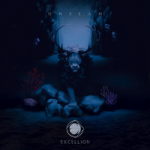 Excellion – Unsean (Self-Released)
Progressive metal that sits on the more djenty side of things is what comes to fruition on Excellion’s fourth release, Unsean. Involved riffs and some melodic leads are the gatekeepers, with a diverse vocal performance from Frozen Chava (ranging from growls to shouts to cleans) giving some heft that this style doesn’t often go into. The atmosphere and melody is well-constructed but it’s nice to see the heavier/groovier side explored more. The type of material that will probably interest the Periphery crowd more than your typical underground-ers, but they are attempting to bridge a gap here. – Kyle McGinn (Excellion on Facebook) 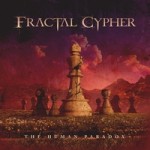 Fractal Cypher – The Human Paradox (Self-Released)
More progressive metal this month, with Fractal Cypher going into a more power/death/thrash styling. Progressive in the more classical sense of the word, some ties back towards Dream Theater are certain. But they don’t leave things at that, occasionally diving full-speed into heavier territory, with death and thrash riffing showing that the band can show some added abrasion instead of retreading the usual grounds (going so far as to toss in some death growls to match the tone). A strong release if you are looking for some progressive metal that isn’t afraid to bring things to heavier waters when necessary. – Kyle McGinn (Fractal Cypher on Facebook) 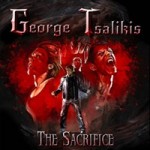 George Tsalikis – The Sacrifice (Self-Released)
Main songwriter and vocalist for New York veteran power metal band Zandelle, George Tsalikis sails his own solo course for this debut record. Tackling most of the instrumentation (complementary drum help from Mike Paradine, lead guitar action from Richie Blackwood and male/female vocal assists as well), you’ll get a 10 track concept record (cut into chapters) based on blood, love, and good versus evil. More traditional and mid-tempo at times, elements of King Diamond, Dio, and Judas Priest come to the forefront in terms of the more straightforward riffing and tempos – allowing George’s multi-faceted range and melodies to shine on “Chapter 3 The Vixen” as well as the catchy, Savatage-esque “Victimized”. Definitely one to chalk up in the dramatic melodic metal category. – Matt Coe (George Tsalikis on Facebook) 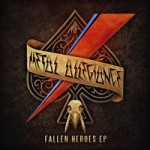 Metal Allegiance – Fallen Heroes (Nuclear Blast)
A three track EP of cover songs brings Metal Allegiance back to the fold after their debut album last year. A tribute to some recently lost rock and metal icons (Lemmy Kilmister, David Bowie, and Glenn Frey). Motorhead’s “Iron Fist” is pretty straight-forward as far as covers go, but Troy Sanders’ vocals hit the spot along with the backing instrumentation. “Suffragette City” benefits from some added boost in the heaviness without wrecking the song’s essence, but it’s The Eagle’s classic “Life in the Fast Lane” that is the gem of the batch. A harder edge to the track meshes well with Alissa White-Gluz’s vocals, which should offer a bright spot for those who have longed to hear her do some clean vocals again. All in all, a fun album that justly celebrates some great musicians that we’ve recently lost. – Kyle McGinn (Metal Allegiance on Facebook) 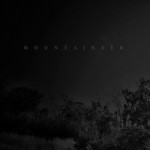 Mountaineer – Coma Fever/Siren Song (Battleground Records)
A true bummer when it was announced that Secrets of the Sky were packing it in, at least there’s some solace in the rising of Mountaineer. Clayton Bartholomew’s doomy riff writing is all over this one, but don’t think it’s Secrets version 2.0. In addition to a solid dose of doomy escapades, Mountaineer also has a more accessible, atmospheric rock element and doesn’t push things too far into heavy waters. Emotive stuff for sure, both cuts here weigh-in with a good mixture of both sides of the band, and the vocals are strong enough to provide some additional accolades. A full-length is planned for later this year, and if it stands up as well as what’s here, it will be well-worth checking out. – Kyle McGinn (Mountaineer at Bandcamp) 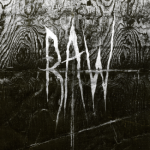 Raw – From the First Glass to the Grave (Aural Music)
Parlaying the likely convergence of delta blues and sludge, Canada’s Raw (not terribly creative with the name, eh?) have managed to break through the mire (or sludge) of the sound they inhabit. On From the First Glass to the Grave, the band breaks out some achingly strong cuts of backwoods, barstool, outback heavy rock, with “I’m a Shell (But Your Man)” emerging as the album’s high point, a bleak, if not stumbling cut of pure honesty and rawness. Not too often a Canadian band provides such a Southern feel, but Raw manages to do so while being warts-and-all. Good for them. – David E. Gehlke (Raw Bandcamp) 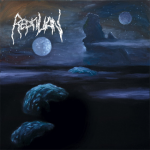 Reptilian (Norway) – Perennial Void Traverse (Edged Circle Productions)
As a bunch of young Norwegian nubes, Reptilian find themselves somewhere between eager demo band, and energetic thrashers. The band’s Perennial Void Traverse debut occasionally nips at doom territory, but their strength lies with breakneck thrash, as found on “”Possessed by the Eyes of the Living God,” a frenetic, supremely tight thrash cut rounded out by a snazzy little bass interlude and Slayer-like harmonies. With frazzled and/or spastic vocals in tow, Reptilian (who would be wise to re-think their moniker) are a rare entry into thrash fields for Norway. Perennial Void Traverse is youthful banzai thrash at its most fertile. (Reptilian Facebook) 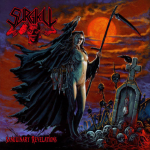 Surgikill – Sanguinary Revelations (Hell’s Headbangers)
Virtually guaranteed to be of quality because Stevo do Caixao from legendary deathsters Impetigo is the main driver, Surgikill’s Sanguinary Revelations debut is, as expected, a raucous, old-school jaunt through the perilous corridors of early Autopsy, early Sarcofago, and early Repulsion. (Lots of ‘early’s’ here.) While the album’s production job does its duty by maintaining the necessary trough of dirtiness, it’s Stevo’s ungodly vocal approach that maintains the most appeal, particularly on speedier, harsher jams like “Psychopathic Awakenings.” A veritable throwback album from a bunch of throwback guys, Sanguinary Revelations should surprise no one, but that’s the point, right? – David E. Gehlke (Surgikill Facebook) 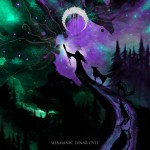 Svlfvr – Shamanic Lvnar Cvlt (Bakerteam Records)
Love the use of a ‘v’ instead of a ‘u’ in the Svlfvr’s name and album title. Really makes one think about what they’re typing…and how the Romans used to spell words. Never the matter, for Svlfvr is a rather voluminous, riff-oriented doom/sludge outfit. There’s a certain sheen and/or shine to their riffs; they’re stuck in traction like some of their peers, which enables an otherwise haunting cut like “Countdown to Death” to take flight. Good cover art visuals, too, making this an unsung doom/sludge find for 2016. – David E. Gehlke (Svlfvr Facebook) 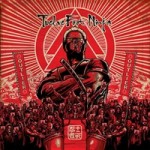 Twelve Foot Ninja – Outlier (Volkanik)
Heavy fusion oriented modern progressive metal here from Australia’s Twelve Foot Ninja on their second album Outlier. A mouthful description if there ever was one, incorporating everything from funk to jazz, djent to modern rock vocals, all encapsulated in this forward thinking montage. Elements of Faith No More, Fair to Midland, Meshuggah, Periphery and Tool all come to the forefront – bass and drums as important as the guitar work on “Sick”, while Indian cultural aspects make “Monsoon” another stand out. Commercial and catchy, fringe people will enjoy this more than the straight ahead metalheads for sure…cool animation cover gaining bonus points. – Matt Coe (Twelve Foot Ninja official website) 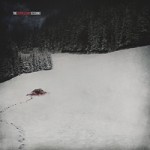 Various Artists – The Depression Sessions (Nuclear Blast)
Two songs each from Thy Art is Murder, Fit for an Autopsy, and The Acacia Strain with this one. Of the 6 cuts, each band contributed a cover song (outside of the metal realm). The original tracks sound about what you’d expect from each act, and sadly ends up showing how similar in structure the bands are in relation to each other. Advertise it as one band and some might not even know the difference. On the other hand, the covers are somewhat more interesting. The Acacia Strain’s “Black Hole Sun,” does a fine job of putting the doomy aspects into the song and elevating it, as does the bouncy heaviness of Fit for an Autopsy’s take on NIN’s “The Perfect Drug.” Thy Art’s “Du Hast” falls a bit flat and veers too far away from the original but you can’t fault the act for trying. – Kyle McGinn (Fit for an Autopsy on Facebook) (The Acacia Strain on Facebook) (Thy Art is Murder on Facebook) 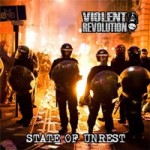