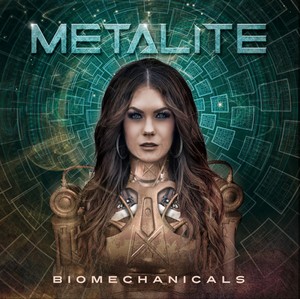 Metalite’s first release, 2017’s Heroes of Our Time, was a thoroughly impressive debut. They managed to capture the best parts of the modern metal sound (complete with bouncy, raging synths) and pair it with a more triumphant power metal base. Given that they’ve managed to nail down a sound that really works for the genre, it seems silly that they’d change much around this time. But even still, Biomechanicals feels just as strong as their debut – paving the way for some greater recognition with AFM Records now behind them.

The only notable difference between then and now is that vocalist Emma Bensing is out, and the band has brought in Erica Ohlsson, whom they originally snagged for live gigs shortly after Heroes was released. The rest of the differences are just some slight tweaks – bettering the sound and production of their debut. What that means is that the smile-inducing nature is still just as strong, if not even more so, than before. The production makes it sound great, augmenting some of the heaviness as well as providing a balance between the electronics and the rest of the instruments. New vocalist Ohlsson has a bit more dynamic to her voice – still not overpowering the music but she has a great range that fits perfect with the band’s upbeat vibe, adding an extra spin of triumph on songs like “Rise of the Phoenix” and “Biomechanicals.” As already noted, the band’s style is addictive for those into that more electronically fueled/metal hybrid. Some of the songs, such as the punchy and galloping “Warrior” and “Breakaway” feature some gorgeous hooks that instantly imbed into your skull. While other tracks, like “Far from the Sanctuary” and “Eye of the Storm” do the same, but also imbue a heavy power metal crunch alongside things in such a way that you are bound to not just be grinning ear to ear, but also impressed by the way that they can fuse the two so successfully.

If you have already become familiar with Metalite, Biomechanicals is going to win you over easily. For the uninitiated, the sheer number of hooks and earworm melodies should turn any modern metal fan in a matter of moments. Certainly one of the most catchy albums that you’ll hear this fall, and just a delight to listen to.