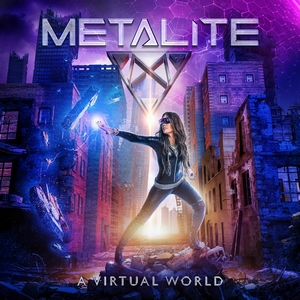 Having established themselves with two previous releases that bring together elements of both power metal and pop, the bouncy and energetic formula for Metalite is pretty well written. What has worked best for them on previous releases is that the band has kept a true metal spirit to everything, and the same stands true for A Virtual World. In short, Metalite continues to wave the flag high for upbeat power metal.

It may be a matter of tweaking the formula, but Metalite really seem to have a grasp on what works best for them at this point in their career. With Biomechanicals, they came more into their own, and A Virtual World expands upon that. There’s no more real direct Amaranthe or Battle Beast comparisons to be made, though fans of said acts will still be thrilled by what Metalite has to offer. Galloping and uplifting riffs bolstered by danceable synths and trance elements, with vocalist Erica Ohlsson at the center of it all and giving it that extra bit of flash with her powerful singing and presence . The standout track this time around is arguably “Beyond the Horizon,” which features trance-like beats bouncing atop driving metallic riffs that culminate in a soaring, fist-to-the-sky chorus that’ll be hard to remove from your skull once it enters. Though “We’re Like the Fire” comes in a close second though, with an incredibly hooky synth section and pounding beats. They can flip the formula a bit, going heavier on the metal side (see the addictive “Peacekeepers” or headbang-friendly “Running”) or more melodic as they do with the ballad-y yet still fun “Alone.” The tracks do run the gamut, offering quite a bit of variety as they twist the nobs on all of their influences in a given direction.

The bottom line when it comes to A Virtual World is that it’s flat-out fun and entertaining. Metalite has continually worked to flesh out their more metallic yet full of pop hooks formula without diluting the heaviness, and A Virtual World is the strongest front-to-back effort from them to date. Though it may not be the most metal way to describe them, just as with Biomechanicals, the first word that comes to mind with Metalite is delightful. Let that alone be evidence that they are trying something a tad different, and are succeeding.