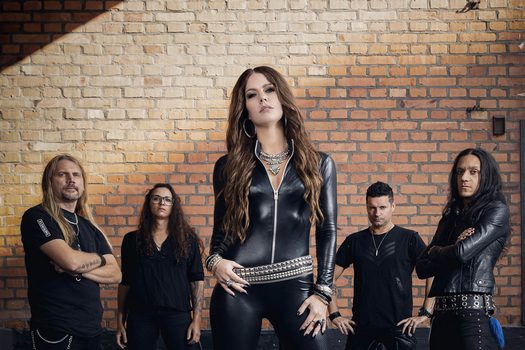 A rising force in modern metal since their debut a few years back with Heroes in Time, Metalite has championed a sound that was equally rooted in electronic and trance music as much as it was heavy metal. With just the right combination of both immediate, catchy hooks and energetic heaviness, the band’s third album, A Virtual World is their strongest release to date. We spoke with guitarist Edwin Premberg and vocalist Erica Ohlsson to get some further details about the album, bridging the pop and metal gap, and plans moving forward.

Dead Rhetoric: How would you compare Biomechanicals to A Virtual World, musically?

Edwin Premberg: Yeah, it’s a good mix. Heroes was a more happy album and Biomechanicals was darker, so this is a nice in-between.

Ohlsson: You get both the happy and the dark [laughs]!

Dead Rhetoric: Erica, you came in with Biomechanicals, did you find A Virtual World to be a different process having been in the band a little longer?

Ohlsson: No, I don’t think so. I think the process was basically the same for myself and Edwin for the recordings. I felt very comfortable from the beginning with these guys.

Dead Rhetoric: What does Jacob Hansen’s sound do for Metalite?

Premberg: He’s a very good producer and engineer. He knows how to put the mix of trance, keyboards, and the metal thing together. Some producers in the metal genre only know how to place the drums, bass, guitar, and all the classic instruments, but Jacob knows how to put in the more modern sound techniques. I got an earlier question in an interview asking if Jacob Hansen is an EDM/Eurodance producer too, because he really gets the sound perfect for these songs. He’s an all-arounder. He does it really well, it doesn’t matter what genre it is. He knows his stuff.

Dead Rhetoric: It seems like with this album, you have really come into your own. What do you feel Metalite sounds like, or what defines what the band is?

Premberg: From the beginning it was my dream to mix these music genres that I really love. Metalite is the perfect sound for me. When Erica got into the band, it really made it perfect.

Dead Rhetoric: You mentioned the happier sound for A Virtual World. Does that run parallel with the lyrics too?

Premberg: Yes, the lyrics are very uplifting too. “Beyond the Horizon” as an example, is a song about how Metalite can get you out of the bad times and bring some positive thoughts. Especially with the pandemic right now.

Dead Rhetoric: Do you feel that people are more drawn to that positive and upbeat sound, just because there’s not as much of it out there in the metal scene? There’s a lot more anger and rage.

Ohlsson: I think you need both actually. Of course, more happy melodies and harmonies are more uplifting and I think during this time we need some hope, and to be uplifted.

Dead Rhetoric: Do you feel that there’s just as much of a dance feel to Metalite as there is a headbanging feel?

Ohlsson: You can dance however you want [laughs]!

Premberg: I’ve gotten a question before about how I expect people to be when the band is on stage – dancing or headbanging. I don’t know, as long as people are singing the songs and know the lyrics, they can move in whatever way they want!

Dead Rhetoric: Do you see the fusion of pop and trance elements in the future of metal, and something that bands can explore further?

Premberg: There’s a lot of subgenres in metal, so I think metal needs all of those things. I don’t think that every metal band should add keyboards like we do, but I think everyone should stick to their thing. This was my thing. When I started writing this type of music, I wanted to add those things because no one really does it the same way I do it. Many people compare us to Amaranthe, but that is probably the only band we get compared to. There’s also bands like Beast in Black, Beyond the Black, and other bands, but they don’t do it like I do. I’m kind of alone in that type of sound.

Dead Rhetoric: I think it’s a fertile ground for people if they want to go into it. The other thing I see with Metalite is that it can work as a nice gateway band. Someone who might not get into heavy metal could come across Metalite and hear those electronic pieces and the clean singing. It’s a nice introduction to a heavier sound.

Premberg: That was my first vision with Metalite. Being a bridge between the metal world and the pop world. You can get pop fans into metal, and vice versa.

Dead Rhetoric: What were your introductions to heavy music? What made you want to go further into it?

Ohlsson: For me, my first meeting with metal was with Metalite. I like the ‘80s rock thing and I have listened to it for many years. Metal was something new for me.

Premberg: I think my first metal experience was with Sonata Arctica when they released For the Sake of Revenge. Stratovarius too of course. I had done some other research into the metal genres, but that was the beginning for me.

Dead Rhetoric: Erica, if that was your first exposure, do you feel that it lends you something different from a vocal perspective than another person who had been following along with the genre for a long time?

Ohlsson: Yeah, I think so. I don’t think my way of singing is that different than how I had been singing before I joined the band. But of course, I think I may be bringing some new stuff to the metal world [laughs]. I hope so!

Dead Rhetoric: This is your third release so far. What have been some of the challenges in getting the Metalite name out in front of people?

Premberg: It’s a tough question because right now we aren’t in the right position to get out and play live shows and all that. So that’s kind of hard, but I think we all do a lot of promoting on the social medias and I am always coming up with ideas for how to plan the future for Metalite. As long as those thoughts are there in my brain, I’ll keep this going. It’s hard to promote the band right now when we can’t do any live shows.

Premberg: Right now we are living in this bubble, with all of the reviews and interviews. I think this is the best part of releasing an album. To let the people listen to the music and have people review your work. I think this time is really nice.

Dead Rhetoric: Is that something that you take into consideration for the band, or do you just look for curiosity and keep doing your own thing?

Premberg: We’re still doing our own thing. It’s very important that you stick to the sound of the band. We can develop the sound of Metalite, but we can’t change it. When we see the music and sound is working all over the world, why change it? We don’t need to change it now.

Dead Rhetoric: You do have this sound that is something unique to yourself. Is there a challenge to making songs that feel like Metalite but don’t feel like new versions of older songs?

Premberg: That’s the tough part – to produce many albums for the same band. You always have to have the older songs in mind when you write and produce. But it’s a fun thing too. To develop the sound and try different things in the songs. With Heroes in Time, I had nothing to compare it with. It’s a challenge, but I like it.

Dead Rhetoric: What are you looking forward to doing as restrictions diminish, apart from live shows?

Ohlsson: That’s the main thing – we are longing to get back on stage again and meet the fans. To do our thing. But, until then, starting with a new project maybe?

Dead Rhetoric: To wrap up, what are the plans for 2021 now that the album is out?

Premberg: We have some festivals here in Sweden, like Sweden Rock and Sabaton Open Air, which are the biggest ones here in Sweden. We are booked, but I don’t know if we will be performing on them due to the pandemic. We also have this mini tour in Spain in September, but we will wait and see. The restrictions change day to day, so it’s tough to plan.