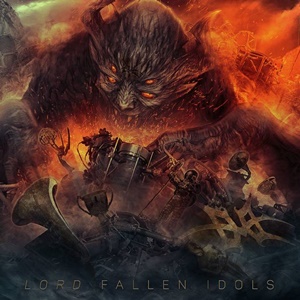 Six years have passed since the last studio album from Lord – but it’s not as if they’ve been idle. Four EP’s, a ‘revisited’ album, and a live record from their ProgPower USA XVII appearance are all out there for the public to consume while waiting for Fallen Idols. The three-piece (filled out by studio drummer Tim Yatras) straddle the lines of heavy/power metal, and consistently pull out new tricks that add to their own take on these genres.

Lord embrace a thick, modern production which allows for the layers of guitars, bass, drums, and multi-part vocal harmonies to sink deeper into your body through successive playbacks. A mixture of American and European influences penetrates certain songs – the added bell/choir effects intertwining effectively on “Immortal” as the crunchy riffs and guitar melodies bubble to the surface, Lord Tim rearing back from some upper register note holding and the chorus shimmers in a semi-AOR platform. Heads down heavy metal featuring double kick maneuvers and churning speed parts gives “Nod to the Old School” a midway energy burst, the lead work from Tim and Mark Furtner mesmerizing in its tapping, whammy bar, and melodic accents with occasional shred antics over the top of it all. It’s as if the band has added a bit of Striker charm to their already solid stock of 80’s/early 90’s influences – Helloween, Iron Maiden, Iced Earth, and Queensrÿche among them, along with occasional nods to more obscure but still relevant acts like Liege Lord (the latter especially on the main groove/laden musical hook for “Chaos Raining” – something that could have been on Master Control). The attention to multi-harmony vocal parts throughout elevates the retention factor immediately – almost in a Queen/Boston way, acting as a contrast to some of the supplemental evil voices that appear on the very addictive title track. Atmospheric buildups also lead to some extreme metal blasts and vocal fierceness during “The Edge of the World”, probably the heaviest song Lord has done to date – a back and forth arrangement that showcases tasty tempo juggling proclivities and could expose the band to some younger listeners who dig that approach.

Masters at their game, Lord deserve all the attention and respect they’ve received from their homeland Australia to the Far East, and even North America and Europe are joining the ranks as ardent supporters of the group. Musically sharp and serving up dynamic songwriting that runs all the power/heavy metal gamut, this could be the premiere full-length in the band’s 16 year plus career.