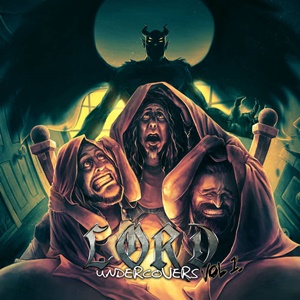 Well-established as one of the premiere heavy/power metal acts in Australia, Lord always enjoy giving their fanbase interesting cover material throughout the years. It’s one thing to take on established metal artists, but these gentlemen also enjoy getting out of a specific comfort zone to tackle non-metal tracks from different eras – as well as showcase some international flair and unsung heroes in their choices. They’ve compiled many favorites in live and studio form – unifying Undercovers Vol. 1 with a double-album selection that includes two fresh cover treats exclusive to this release as well as two Blackened Angel project covers associated with guitarist/vocalist Lord Tim.

The latest songs to receive the Lord revered treatment include Australian pop artists Savage Garden with “To the Moon and Back” and Judas Priest’s “Reckless” – the latter from their controversial synth-guitar laden Turbo days. Certain songs also see the band switching out the main vocal duties – the live version of “Creeping Death” featuring guitarist Mark Furtner and “(I Just) Died In Your Arms” originally done in the 80’s from the Cutting Crew giving bassist Andy Dowling a chance to showcase his fine pop-oriented register. Best cuts will vary depending on your tastes – as this compilation spans offerings from Pantera to Iron Maiden and Symphony X, as well as Australian favorites like Icehouse, Kylie Minogue, and the Little River Band. I really enjoyed Blackened Angel’s take on “Night People” from Dio, the heavier take on the mysterious 80’s synth pop masterpiece “Send Me An Angel” from Real Life, as well as “The Whisper” from Queensrÿche’s second album Rage for Order. Paying tribute to a lot of great music not just in their homeland but also internationally – as there are songs from acts in Japan and Canada that prove Lord encompasses a serious, dedicated look at a worldwide scope when it comes to great songwriting.

You’ll also get two hours of track-by-track commentary from Andy included in your purchase – providing plenty of value and entertainment for your money. The first in a series, this will be something to key in on as Lord delivers a thoughtful, passionate package that gives you insight into what these musicians love about metal, pop, AOR, and melodic, catchy songwriting across the spectrum.