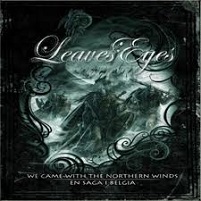 The handful of times yours truly has seen Leaves’ Eyes live, it appeared a bit of live “trickeration” was going on if you catch my drift. The band sounded a little too pristine for these ears, but who cares – singer

Liv Kristine is beyond charming and co-vocalist Alexander Krull has hair as long as Kristine is tall. Not like that warrants anyone a free pass, but in their brief history the band has proven to be a viable commodity thanks to Kristine’s soothing vocals and a unique stab on symphonic metal.

We Came With the Northern Winds/En Saga I Belgia is designed to capture this sextet on the road and live, doing so admirably, with a detailed and lengthy movie comprising of DVD

1. Interviews with Kristine, Krall and the guitar tandem of Thorsten Bauer and Mathias Röderer chronicle the band’s journey from their Theatre of Tragedy/Atrocity spin-off era to triumphant tours across the globe.

(who speak in Norwegian) get in on the act and reels of tour footage show a band on the steady rise, especially in the Southern hemisphere. Tour triumps and mishaps are discussed, as are each band member’s personality, to of which all members of Leaves’ Eyes gush about each other.

For DVD 2, a live concert

shot in Belgium in October of 2007 is on display. The band is remarkably pristine (see above nudging) in the live setting, yet the vocal interplay between Krall and Kristine makes for some interesting stage moments. Song-wise, most of the band’s brief catalog is included, most noteworthy being “Elegy,” “Ocean’s Way,” and perhaps the band’s best song, “Solemn Sea.”

Professionally-packaged, shot, and produced, We Came With the Northern Winds/En Saga I Belgia is an all-encompassing look at Leaves’ Eyes. Devotees of the band will no doubt be hot on its trail, newcomers would best be advised to start here or with the Lovelorn album and make light of how much better Leaves’ Eyes is today than Theatre of Tragedy.