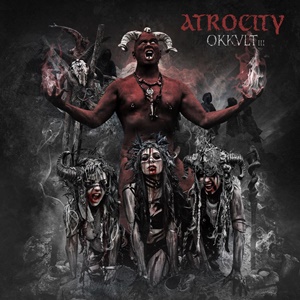 The culmination of a trilogy that started a decade ago, Atrocity is a reliable force in the German death metal community- returning for Okkult III. A longer wait time between studio records takes place now for the five-piece for numerous reasons – the active profile of their symphonic/gothic metal act Leaves’ Eyes on the touring/recording front, plus the longer layoffs in lockdown mode from the pandemic. Delving deeper into the dark side of human history with tales of Polish serial killers, modern ghost conjuring, occult machinations of the Vatican, and World War I conspiracy themes, the music equally has this aggressive, instinctive propulsion that’s hard not to get swept up by, steamrolling those who’ve loved the band (and straightforward death metal) for decades.

The musical components contain these evil chord progressions stacked together in low-tuned brutality yet maintaining a balance of ideal transitions that still hook the listener in this crunchy or groove-driven manner. Micki Richter and Luc Gebhardt as guitarists lay down sinister riffs plus frantic lead breaks that induce hair raising action – even veering into NWOBHM/Iron Maiden-esque angles in spots for “Bleeding for Blasphemy” that penetrate the aural landscape in extreme metal. From the first tribal-like hits for “Desecration of God” on through to the sick double kick/fill extravaganza that takes place during “Cypka”, Joris Nijenhuis is up to the task in his main speed to transitional mid-tempo drumming duties – elite at his craft, crazed while fluid but never missing a step. The always professional growling nature to Alexander Krull pushes these compositions to upper tier appreciation – he knows when to go for the right inflection, delay effect, or push the parameters of his range. Check out “Priest of Plague” and the hyperkinetic “Faces From Beyond” for two examples of his stellar bellow that stirs up images of classic Death. Those wishing to get the double CD version also get instrumental versions of the ten main tracks, a flag, patch, postcards, and an autograph card as bonuses.

Expect another domestic chart entry for these Germans – Okkult III keeps Atrocity aligned with what people have come to know, love, and expect in these death metal mavens.