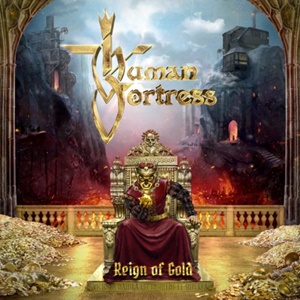 The sixth studio album for Human Fortress, Reign of Gold finds the sextet firmly in control of their epic heavy metal leanings. Working with renowned producer Tommy Newton (who helped them when a Rock Hard magazine best unsigned song contest back in 2000), these musicians aim for a dynamic level of consistency while exploring the many horizons and influences past and present that can be applied to their favored style. Employing two guitarists plus a keyboardist opens numerous levels of sonic possibilities, often harmonious and driving but diverse in atmosphere when called for.

Dirk Liehm takes on orchestration as well as keyboard responsibilities, setting a folkish, Middle Ages-like nuance to elevate the epic guitars and dramatic melodies within “Lucifer’s Waltz”, allowing singer Gus Monsanto a chance to convey a sinister, theatrical edge to his lower to higher range from the verses and chorus. Bagpipes and military drum hits from Apostolos Zaios signal the atmosphere for “Marital Valor”, the mid-tempo electricity captures an impassioned arrangement – the music coming together in a powerful, groove-oriented metal affair that makes the track a second half, addictive favorite. At other times you sense a playfulness of a progressive rock/folk metal nature, as if Kansas and Skyclad are entering a heavy metal platform for “Bullet of Betrayal”, the syncopation building cultural context during the instrumental sections which contrast the fairly straightforward heavier verses. At other points, the band lay down some heavier/ Dream Theater-like guitarwork (think Awake era) against Tad Morose for “Surrender”, another bristling track where Gus rises to those falsetto notes to squeeze out ‘torture’ for multiple emotional layers. What’s also exciting is to hear the band just get out and lay down some solid power metal mechanics with melodic hard rock flair – “Legion of the Damned” a fiery cut featuring numerous Dio meets Ozzy/Dokken mechanics and proper orchestration enhancement to elevate all the hooks.

A natural progression from 2016’s Thieves in the Night, Human Fortress are a heavy metal band with epic power and folk-like aspects, ensuring a diverse album that isn’t mundane or monotone. Hoping to get more active on the live front, Reign of Gold represents a great gateway effort to understand what this group is all about.