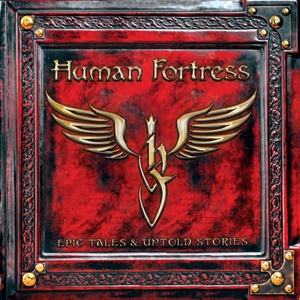 Striking hot after 2019’s Reign of Gold success, German band Human Fortress release a double disc of previously unreleased new/rare songs and greatest hits for Epic Tales & Untold Stories. The sextet in its current incarnation have now been together for eight plus years – and that chemistry allows for some special moments throughout this recording as the band revisit specific songs in new interpretations, or issue other material that maybe didn’t garner attention due to its rarity/limited access. The 23 songs are split into a shorter eight track outing as well as fifteen ‘greatest’ hits from the band’s solid back catalog, exposing the listener to over 102 minutes of melodic power metal.

Intertwining a mix of classic metal riffs with some solid keyboard orchestration and energy, you’ll get a Tad Morose meets Teutonic feel for a conventional power offering like “Vain Endeavour”, while the follow up “Free” showcases more of their melodic ballad leanings, Gus Monsanto reaching deep into his vocal bag for his lower register with AOR-ish background harmony support in key sequences. Old melodic hard rock aspects crop up within “Cruel Fantasy”, the guitars weaving an Ozzy/Dokken-like tapestry for a circular keyboard hook and seductive vocal melodies to make this another standout towards the back half of the first disc. As far as disc two, it’s great to hear the progression of Human Fortress from those early Jioti Parcharidid-led singing days to Gus’ entrance – the songwriting and style taking on a bit more of a modern tone compared to those older power metal driven records. Propulsive double kick/ crunchy guitars give “The Dragons Lair” that Kamelot-esque charm, while “Border Raid in Lions March” has that epic Falconer/Manowar-like atmosphere, the vocal melodies matching the marching musical strains in tandem. By the time the Reign of Gold songs like “Surrender” and “Thunder” finish the final disc, you understand the band’s natural evolution to become a modern melodic power metal act that looks at the grey areas to diversify their approach.

If unfamiliar to the work of this band, Epic Tales & Untold Stories should be the ideal primer to catch you up to the discography.