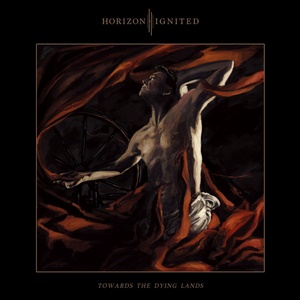 Melodic death metal has been a foothold in the hearts of most scribes for this site – there from the infancy of the style in the 1990’s captivating listeners worldwide. Makes sense that as the pioneers evolve or disappear, the next breed take the proverbial baton to push their creative ideas to the masses. Welcome Finnish sextet Horizon Ignited to the scene, arising in 2017 to record a debut album After the Storm independently in 2019. Gaining hundreds of thousands of listeners through Spotify, Nuclear Blast took notice and signed the group – bringing us to the follow-up album Towards the Dying Lands.

Using a twin guitar plus keyboardist driven lineup fills out the main musical landscape in a full yet versatile manner – keeping things heavier when necessary, but also catchy and harmony-driven during the key circular hook or chorus sequences. Drummer Jiri Vanhatalo and bassist Jukka Haarala flex their solid instrumental skills in unique manners for the opening sequence of “End of the Line” – the former using faster double kick movements against a slower, groove-driven backbeat as the latter punctuates the vocals in beefy notations. Using everything from personal depression and suicidal thoughts to social/religious criticism as well as fictional stories in book/movie influences ensures the words mirror the diverse melodic death metal with semi-metalcore nuances atmosphere present track to track. The melancholy nature that comes natural to Scandinavian artists appears throughout even as the crunchy rhythms and supplementary twin guitar accents pop in – check out “Guiding Light” or the slower, marching “Death Has Left Her Side” for these elements, the latter shifting between alluring clean guitars that build into this cascade of melodic death runs, as vocalist Okko Solanterä morphs from evil growler/screamer to this alternative, emotional comforting space when he uses his clean register.

Highlights change daily. The opening cut “Beyond Your Reach” possesses this immediacy through an instantly convincing keyboard/guitar interplay passage, morphing into subsequent riffs and extreme/clean vocal tradeoffs that will gain favor live, while closer “Eventide of Abysmal Grief” contains a rich piano/ guitar start and this incessant hypnotic main riff that should cause mass pit / crowd surfing madness while the hordes scream out the closing strains vocally. Leaving the listeners wanting more at ten songs in under forty minutes, Horizon Ignited with Towards the Dying Lands blends together the youthful spirit of early In Flames, a pinch of Sentenced, as well as some modern metalcore accents without falling into any conventional cliches.

One of the new breed to watch for sure.