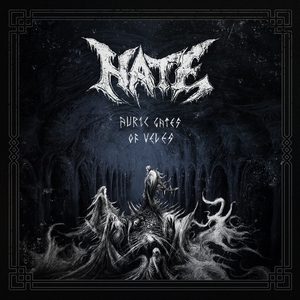 Following up on 2019’s Tremendum, Poland’s Hate returns for their eleventh album with Auric Gates of Veles. With their previous output being a step above some of their older material, it seems things are continuing to look up for the band, with a label switch from Napalm over to Metal Blade occurring as well. While Auric Gates of Veles doesn’t really make much of a turnabout from Tremendum, it’s a blasting good time.

The band play to their developed strengths, and after some rockier patches in the past, they have the formatting down for what works for them. Blast-forward blackened death metal starts off from the beginning with “Seventh Manvantara” setting the pace, with a bit of their countrymen Behemoth in essence, but not too much thankfully. They string together these exhilerating blasting sections with some meloblack atmosphere, particularly on the slower paced title track. Not that every track is a non-stop speed rush, but the title track stands out in its ability to bring some enjoyable grooves to the table. Some other highlights include the firing on all cylinders conclusion in “Generation Sulphur,” the slow buildup of “Sovereign Sanctity,” and the almost entirely frenetic “Thriskhelion.” All in all, despite the frequent occurrence of blasting, the band does their best to keep things interesting and the work on melodies (just as in Tremendum) is notable and welcomed.

Given that the band has a major push behind them at this point with some solid material in the immediate back catalog, Auric Gates of Veles simply adds to the their legacy. Hate provides an entirely visceral flavor to their music, but remembers to pepper it with some atmosphere and melodies to give it a more memorable and flavorful vibe.