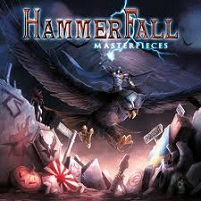 It’s only fitting that Hammerfall would add to the multi-band pile-on that is all covers albums. After all, the Swedes have zero gauge on their perception as phony trad metal torchbearers, but in the end, that sentiment alone has allowed the band persevere and succeed for over a decade.

Masterpieces is a collection of 18 cover songs

from various recording sessions throughout Hammerfall’s career. Some choices are fairy obvious (i.e. “Breaking the Law,” Loudness’ “Crazy Nights,” and Helloween’s “I Want Out”), while the more obscure numbers such as Warlord’s “Child of the Damned,” Picture’s “Eternal Dark” and Chastain’s “Angel of Mercy” emerge as the standout numbers on the album.

No major surprises abound, save for Kai Hansen’s appearance on “I Want Out” (a song

he wrote while he was trying to leave Helloween) and Rainbow’s “Man on the Silver Mountain.” Execution is practically flawless and even guitarist Oscar Dronjak gets on in the lead vocal act for “Breaking the Law” with his thick and heavy Swedish accent adding a minor humorous twist to the Priest classic.

Cover albums are hardly new or even fun at this moment in time, but Hammerfall has succeeded in taking a handful of songs few of us have heard and made them something halfway enjoyable, which of course, cannot be said for at least half of their studio output…