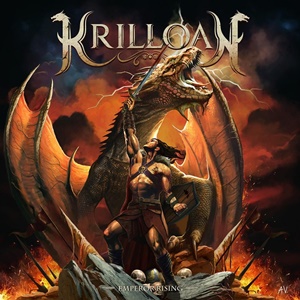 What’s the best way to make an indelible impression as a newer act playing power/heavy metal? Well, it’s surrounding yourself with stellar players, knowing the conventional elements that appeal to the biggest followers in the genre, and then recording your ideas in convincing fashion. That’s the framework for Swedish act Krilloan with their debut album Emperor Rising. Arriving on the scene in 2020, their first EP Stories of Times Forgotten garnered healthy buzz, enough to sign with Scarlet Records. Drummer Christoph Brandes joined the band this year (also mixing/mastering this record at his Igauna Studios), and the quintet certainly evoke the epic hymns plus sing-along, fist pounding anthems that fit in that Teutonic/European mold we’ve come to love for decades.

Twin guitar harmonies abound courtesy of Klas Holmgren and Steve Brockmann along with a profound bass fluid ability from Marco Toba to form this trio musical juggernaut that provides followers of Blind Guardian / Helloween with comfort – “Sons of the Lion” and “Into the Storm” leading the charge. Beyond the obvious choir-oriented vocals penetrating key verse/chorus passages, the main vocal delivery from Alex Van True has that high caliber falsetto conviction as well as the mid-range bard-like presence that ties the fantasy, magical, and mystical tales together. Check out his soaring melodies on opener “Prince of Caledor” as well as reflective, emotional demeanor on the ballad “At the Break of Dawn”, a key dynamic that separates a good from great set of musicians in the power metal realm. The energy level never wavers, even as you reach the double kick/choir-fueled “Stormlight” and Hammerfall-esque closer “Angels Sacrifice”.

Add in the obvious dragon/warrior cover from Alvaro Valverde that leaves little to the imagination as to what you can expect when pressing play on the proceedings, and its evident that Krilloan satisfy those desires when listeners wish to be whisked away from present day stressors and journey into lands far beyond space and time. Emperor Rising succeeds due to playing to its strengths – hopefully adding legions globally to savor the steel.