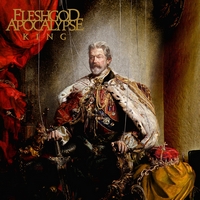 There’s no one that does symphonic quite like Fleshgod Apocalypse. Their progression in form and function since Oracles has been one of ever-increasing bombast and spectacle. Of course, this came with a shift in dynamics from technical death metal with some injected symphonic elements to a full-blown death metal/operatic hybrid but there’s only so much space within the textures that they create. King will find some familiarity among FA fans, but with enough growth and a few surprises to keep listeners coming back.

The first thing one can hear when listening to King is how FA seemingly listened to complaints about Labyrinth. King feels much more dynamic and there’s vastly more breathing room within the production. King sounds menacing instead of bloated. They’ve really taken songwriting into effect, instead of focusing on the “wall of blastbeats” that some previous songs turned into. The crushing groove they experimented with on “Minotaur” really impacts King for the better. “Gravity” and “Syphilis” have some wicked groove and rich, epic melodies to soak in, with the later giving Veronica Bordacchini a chance to shine within the FA format. She also is the centerpiece of the vocal-driven opera piece “Paramour,” providing a chance for a palette cleanser between two of the album’s most vicious tracks.

The added dynamics really allow the band’s more familiar elements to shine a bit brighter. “Mitra” and “And the Vulture Beholds” are the blistering, ‘knock you back in your seat’ songs that one expects from the band. “Mitra” even sees the symphonic elements sink into the background, allowing for an onslaught of death metal most grand. Leadoff single “The Fool” has a playful opening and near-bouncy orchestrations that are sure to intrigue those brought into the band through “The Violation.” One cannot get through a Fleshgod release without instrumental intro and outro (which is of course the title track) and both serve their necessary purpose. Lastly, King also heralds an overarching concept in tow, but this time they’ve decided to give it a more modern and relevant approach.

Fleshgod Apocalypse stick to their guns and ratchet up the qualities that make them work on King. Easy to please long-time fans with this one, yet some naysayers may be won over as well due to the increased dynamics and more breathe-able production. This is Fleshgod Apocalypse at their finest.