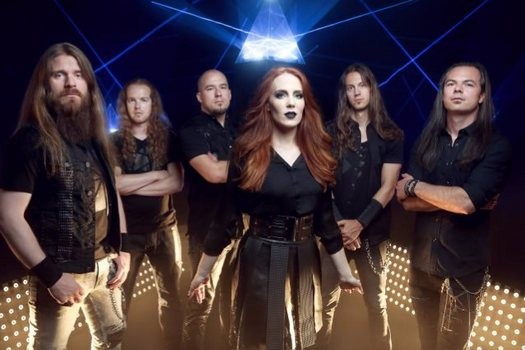 Objectively, it seems a little silly to drive all the way to Worcester Massachusetts when there’s a perfectly viable alternative in New York City right there on the tour routing. However, given the strong local billing present at the Palladium show, it seemed that the best option would be to take in a few of New England’s finest along with the formidable national acts. An what a good decision it was!

Unfortunately missing out on Goldenhall and Forever’s Fallen Grace, I was able to get into the doors a few minutes prior to Seven Spires hitting the stage. Desperate to catch this band since I last saw them open for Amaranthe at the tail end of 2015, it seems that time has only made them stronger. A large presence of Seven Spires shirts within the Palladium upstairs also seemed to rightly imply this band is headed for big things. A short 4 song set (each band had 20 minutes) showcased the many facets the band has going for them: the charismatic vocals of Adrienne Cowan, the shape-shifting riffs that move from epic and melodic to more abrasive territory, and some frenetic solos from Jack Kosto. Their performance was nothing short of spellbinding, whether they were delivering some headbanging riffs at the more melodic death range of the spectrum or providing a more theatric and fun angle (“The Cabaret of Dreams”) and engaging the crowd for sing-a-long participation. This band is primed to explode if given attention at the national level.

Within The Abyss was up next, whom I had seen previously in August in Connecticut (along with Thunderforge) and it’s clear they’ve stepped up their game even in a mere 3-ish months from that first gig. Having a drummer behind the kit certainly made a difference, but besides the obvious, the band’s darker symphonic approach felt more confident and heavy. The heavy aspect serves the band well, and I’m eager to see where they go next as they continue to get their name out in the live setting (and perhaps a release down the road).

Closing out the local action was heavy/power metal act Thunderforge, who provided an excellent set as always. Fun to watch with their interactions between members, who are clearly having a ball on stage (there was also the usual ‘go into the crowd and play’ antics), as well as enjoying the energetic and catchy tunes that they were belting out. Power metal is pretty hit or miss, personally speaking, but Thunderforge do it right in both their live presence and the music itself. If you are in the northeast, you really need to see these guys for yourself.

Scurrying downstairs, The Agonist had just started playing their set, which would cover 7 songs. Three fresh ones from the recently released Five (“The Villian,” “The Hunt,” and “The Moment”) all sounded great with the extra live kick (the band sounded effectively heavier, which added to the charm) and frontwoman Vicky Psarakis has settled in quite nicely with the act, even adding some of her own flair to older cuts like “Thank You, Pain” and “Panophobia.” Lots of crowd engagement from across the board, and the live energy was palpable – it’s been a while since The Agonist had a headlining run, so hopefully next year we’ll see an extended set from the act.

Russian blackened folk group Arkona hit the stage next, providing a solid mix of epic sounding tunes with just the right amount of playfulness added to them. It didn’t take long for the crowd to fully partake in the band’s music while vocalist Masha enigmatically moved about on stage, with frequent dancing and clapping filling the Palladium, particularly towards the end of their set, which featured “Stenka na Stenku” and “Yarilo.” While the authentic folk instruments (flute, bagpipes) added some flair, they never overtook the rest of the instrumentation, which kept the intensity high. An impressive set that made me recall the glory days of the Paganfest tours and the fun factor that was always present there.

Upping the heaviness quotient was Italy’s Fleshgod Apocalypse, who focused much of their set time on this year’s King. Cool that they can bring more of an operatic presence at this point, with Veronica Bordacchini able to tour with the band and provide that little something extra (this is the first time I’ve been able to catch FG since her induction). The band sounds massive in the live venue at this point, perhaps more so than on disc, but from a personal standpoint, it’d be nice to have a couple more “rippers” present in the set instead of so many mid-tempo ones. That aside, they whipped the crowd into a frenzy on many occasions, particularly with “Pathfinder” and “The Violation.” As an added bonus, last show shananigans were at play, with Epica coming out during their set with hazmat gear on, spritzing the band as they played (FG would return the favor later coming out in bathrobes and parading around during Epica’s set).

Epica’s NYC gig was the first 2016 show I caught back in January, so it was cool to come full circle here in December and witness them again, with their new album now out and about. Speaking of which, the band would play a large chunk of it this evening, with 8 tracks from The Holographic Principle in the set. Considering their recent tour at the start of the year, and how strong the album is overall, it seems doubtful anyone would be complaining about it. The new material lost nothing in translation to the live setting, with “Dancing in a Hurricane,” “Divide and Conquer,” and “Universal Death Squad” being particularly memorable, but “Beyond the Matrix” proved to be the winner live as well, playing during the encore and inciting a bouncing pit during the chorus. Outside the new album, the set was rounded out by some usual classics, with “Sancta Terra,” “Storm the Sorrow,” “The Obsessive Devotion,” and “The Essence of Silence” alongside a few more squeezing their way into the band’s lengthy set.

Despite the long run the band has had this fall, the band still had their charm and charisma intact for this final gig of the tour. Their energy is infectious, and it’s a treat to watch them, full of smiles, doing what they do on stage. The crowd more than willing to do their share of the participation as well, singing, moshing, clapping, bouncing – whatever the occasion entailed. With two North American runs in one year, it seems likely they make take a breather, but one can still hope to see them back in 2017 at one point or another.