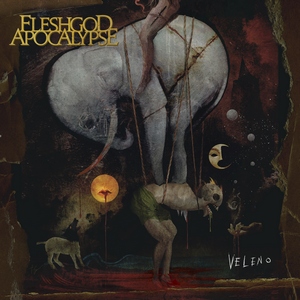 If Fleshgod Apocalypse has seemed to do one thing over the years, they has gained more control. Going back to their first few albums, there was a bit of unhinged madness to their display of technical death metal on Oracles, which slowly tempered itself into something more as they continued to enhance the symphonic aspects of the band. The last album, King, seemed to strike a fine balance between insanity and elegance. It’s been three years since then (with some line-up changes in the mix), but Veleno shows the group capable of handling change and attempting to add more diversity to the formula.

The first surprise coming in right off the bat with the effectively titled “Fury,” which eschews the usual instrumental opener and instead blasts right into the fray. Having Francesco Paoli back in vocal duties may harken back to the early days of the band, but even “Fury” is not without its symphonic elements. Fleshgod is not the band it is without both the extreme metal and orchestration walking hand in hand. The album’s second track, “Carnivorous Lamb,” makes sure to kick up more of the symphonic pieces, as well as an interesting turn towards some near folk-y moments as it continues to lay into the speed runs. The opening to the album makes sure the listener knows the band has not lost its sense of brutality and velocity, as “Sugar” and “Worship and Forget” then follow suit. The band always shines on this particular blend of frenetic energy with a huge sense of orchestral scale and all of the aforementioned tracks do an excellent job of reminding the listener.

Some tracks go a bit further outside of the usual Fleshgod territory, but work for the most part. “Monnalisa” has some rather modern sounding basswork and rasps that feel near In Flames-esque in execution, while keeping things rather melodic over all. “Absinthe” features a slew of those Paolo Rossi clean vocals that add to the manic sound of the track, particularly when combined with the choir. Some bombastic tempo accelerations make the song even more dynamic. The more diverse second half continues with the bouncy and melodic but still a bit crazied feel of “Pissing on the Score” before taking a real left-hand turn with “The Day We’ll Be Gone.” A much more restrained (and less death metal) track that relies heavily on the dynamic between Veronica Bordacchini’s soprano vocals and Paoli’s growls, there’s a good contrast it feels too lengthy – a fate shared with the following track, “Embrace the Oblivion.” Couple that with the instrumental outro, and the last few tracks make the album feel a bit bloated. Enjoyable, but for a band that often relies upon speed, it’s a bit much all at once to take in.

Veleno shows some strength in diversity, even if all of the experimentation doesn’t pan out for the strongest Fleshgod Apocalypse album to date. That said, there’s no reason that fans won’t get some mileage out of the album, and it provides some potentially fertile new ground for them to cover in the future.