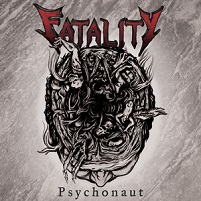 Self-proclaimed “party thrashers,” Toronto’s Fatality went the Indiegogo route in order to fund their Psychonaut second album. There’s a growing stigma toward bands who opt to solicit for funding of an album and/or tour, but really, there’s no money in metal, so you can’t take digs at an unsigned band who is looking to tour and release a proper album. Indeed Psychonaut is pretty proper (in a thrash sense, of course), with totally pro packaging and a natural, lively production job. Good to see the money went to the right place.

The “party thrash” tag instantly brings to mind Municipal Waste, yet the two parties share few similarities. Fatality operates without the crossover element MW does, with technical, roundabout riffs forming the foundation for their zippy thrash sound. Because of the spunky nature of the album’s eight cuts, one could side with the Anthrax-on-Nuclear Assault pacing of “Thoughts Collide” or the gung-ho gang vocal action of “Monstrous” and the excellent title track, complete with a rousing mosh part that is preceded by a quick bass rumble.

Psychonaut scored well because it doesn’t take the dumb-ass thrash ball and run with it; instead, these are action-packed numbers, a bit carefree, yet hardly insipid. Currently hitting the boards across North America, there’s little doubt that Fatality are even more energetic in the live setting than on record.