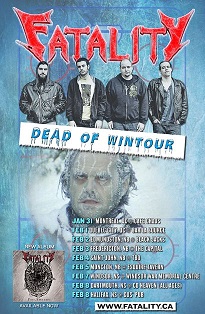 Toronto thrashers FATALITY have announced the dates for their upcoming Dead Of Wintour which they have released a series of hysterical promo videos. The band’s most recent album, Psychonaut was released on June 28th, 2013 along with music video for single ‘Thoughts Collide’ which were fan funded through an IndieGoGo campaign.

“What is it that I love about the East Coast of Canada? There seems to be some sort of pungent energy that clings to the air like that of a great high school party where everyone got laid. It’s that work hard, play harder, get drunk and eat lobster, call in sick from work just to air guitar side of the country that I have grown to love and respect,” stated band vocalist and guitar player Spencer LeVon. “Fatality is proud to announce the Dead Of WinTour spanning from Montreal to Halifax between January 31st and February 8th to help bring a little bit of heat back into the heart of a frozen continent.”

Details on the shows can be found at Facebook.