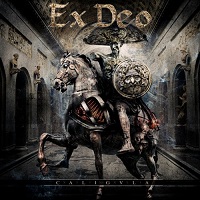 This must be a nice little creative retreat for the Kataklysm guys, you know? In their side band Ex Deo, they don’t have to hyper-blast, nor do they have to follow the playbook they’ve so strongly executed since the turn of the century. Instead Ex Deo for lack of a better term, allows the Canucks to get their “Rome on,” for the band is rooted entirely in Roman mythology. And it’s far from contrived or self-serving; Caligvla, like its 2009 predecessor Romulustotally comes across as a genuine article…even if the lads feel the pervasive need to wear armor in their promo shots.

“Cinematic death metal” would probably be the rightful tag for this outing, for Ex Deo’s sound is predicated largely around mountainous, orchestral keyboard patches courtesy of Blackguard’s Jonathan Lefrancois-Leduc. The mid-tempo pace that is laid out from the onset essentially trollops with deliberate intent, while some meaty riff-action is spewed forth by guitarist/producer J-F Dagenais and bassist-turned-guitarist Stephane Barbe. It all congeals rather easily, as the domineering “The Tiberius Cliff (Exile to Capri)” practically begs one to give these guys a soundstage and a greenscreen.

The overt conceptual nature of Caligvla practically begs for songs to hit over the ten-minute mark, yet there’s nary a sign of that here. This is where the shadow of Kataklysm looms largest, for like their main band, Ex Deo makes ends meet with songs, not pointless exercises in “epicness.” Lest we forget band spearhead/vocalist Maurizo Iacono, who appears to relish in the role of storyteller, telling the tale of the vicious Emperor Caligua, who is history has long suggested, is quite the merciless and bloodthirsty dude.

While there’s not a drastic sonic difference between Ex Deo and Kataklysm (subtract the hyperblasts and speed, and there you go), Ex Deo serves its purpose. Caligvla from top-to-bottom, has the type of cinematic, ready for 300, hi-fi quality that should allow for the Canucks to have a long and fruitful career. 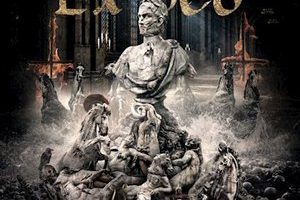