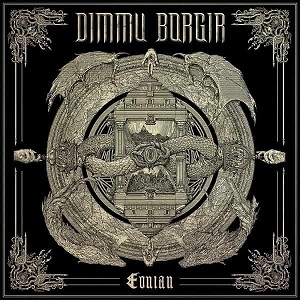 An album that is perhaps better suited for the red carpet than black, if you catch our drift, Eonian is Dimmu Borgir’s absolute slide away from black metal. The band’s inclusion or non-inclusion (however you want to say it) has been subject to debate for as long as keyboards became the primary element of their sound, which is either Stormblast or Enthrone Darkness Triumphant. Coupled with Dimmu’s popularity and harrowing prospect of bringing black metal to the masses (which never happened) and you have an outlier band all the way through, something that Eonian will only further supplement.

Heavily orchestrated, Eonian is, perhaps, Dimmu’s most elaborate, but the least threatening album to date. The grandiose boasts of lead single “Interdimensional Summit” are highlighted by one of Galder’s patented melodic leads, a Dimmu staple since he joined in 2000. While they don’t have the sheer weight and throttle of say, songs off of Death Cult Armageddon, “Interdimensional Summit,” “Ætheric” and “I Am Sovereign” possess the sort of cinematic, on-par-with-drama flair that has become symbolic with Dimmu in recent memory.

What is lacking is obvious: the extremity, something that only passes through when drummer Daray is turned loose, which, to many folks’ chagrin, is not often enough. Instead, Dimmu takes the full-on plunge into unchartered waters with “Alpha Aeon Omega” and “Rite of Passage,” two thoroughly melodic cuts that again, rely less on riffing and more on the band-produced orchestral arrangements and Shagrath’s scathing rasp.