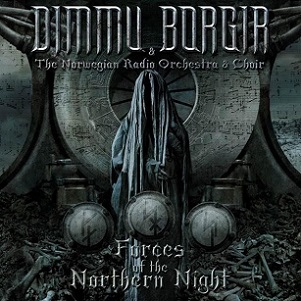 Their reputation now earned as new album slow-goers (their last being 2010’s Abrahadabra), Norway’s Dimmu Borgir are gradually creeping back into view with the two-disc live set Forces of the Northern Night. Comprising of their 2014 set with the Norwegian Radio Orchestra and a 2012 gig at Wacken, Forces of the Northern Night, for all intents and purposes, is a long-overdue live chronicle of Dimmu. However, the orchestral and “live” appeal of the set feels a little lukewarm.

Dimmu with the Norwegian Radio Orchestra is a fine pairing, obviously, with the band’s sound tailor-made for the bombast of a full orchestration. A good chunk of Abrahadabra is featured, with notable highlights including the menacing “Born Treacherous” and dramatic “Dimmu Borgir.” Some may chuckle and/or chortle at the sound of a full choir trying to replace ICS Vortex’s clean vocals on “Progenies of the Great Apocalypse,” but it’s probably best they tackle them as opposed to someone else. The best pairing between band and orchestra is “The Serpentine Offering,” a romp still capable of providing the soundtrack to an A-list movie…or the apocalypse. Either one works.

The Wacken set also brings in a host of backing musicians, this time 100. Classic cuts like “Kings of the Carnival Creation” and “Mourning Palace” get the proper lift, with full participation from the Wacken throng. Sadly, no inclusion of “The Insight and the Catharsis,” a song ideal for such a setting.

What could be considered a stop-gap, Forces of the Northern Night is simply buying Dimmu time for their next studio opus. It also gives pause to how big the band was and how big they still can be. They just actually, you know, need to release a new album. Beating a dead horse here.