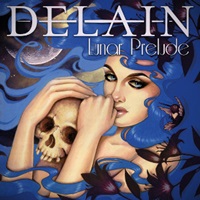 Vibrant times for Delain – prime time tour exposure (since the fall of 2014 in North America alone on runs with Sonata Arctica and Nightwish separately) and a series of albums that keep their infectious brand of melodic symphonic metal cruising along makes inevitable headliner status only a matter of when, not if, it will happen. Never one to rest on their laurels, this eight song EP Lunar Prelude (this scribe believes it’s album-length by old vinyl standards at 36:34) contains two new songs, a new version of “Don’t Let Go” which was a bonus track from their last studio album The Human Contradiction, four live songs and an orchestral reprise of one of those new tracks “Suckerpunch”.

Hitting on the two new songs, the band place emphasis on bright keyboards, a stirring percussion/quick guitar break mid-section and equally intoxicating vocal hooks for “Suckerpunch” as Charlotte Wessels keeps her range in sweet measures and the background ‘oh…oh…oh…oh, oh’ refrains reverberating in the recesses of brain matter for future live audience replication. Meanwhile “Turn the Lights Out” showcases their reflective, melancholic side, not quite in ballad form but still touching on all the right semi-modern chugging guitars and symphonic strains to channel heartaches or life struggles into game changing experiences. Having not heard the original it’s tough for me to make accurate comparisons, but this version of “Don’t Let Go” has a vibrant, exotic texture to the main keyboard/guitar interplay which allows Charlotte to weave a lot of her pop-oriented charm to this swinging, dance-oriented track.

Wisely choosing four live songs from The Human Contradiction, it’s hard to deny the instantaneous melodic nature to “Lullaby”, while “Army of Dolls” straddles that symphonic/pop metal nature that has put Delain on the rising star list worldwide – including the audience clapping and chanting during certain instrumentally softer sections. Expect a new full-length studio record before the year’s end, and probably no more need for any opening slots as their songwriting and performances in the genre speak for themselves.