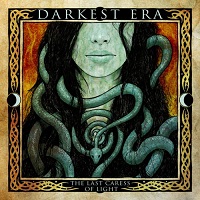 Irish metal circa 2011 is almost solely associated with Primordial, who finally are getting their just due after years of being so consistent and earnest. Perhaps looking to piggyback off Primordial’s success is another Irish band in the form of Darkest Era. Suitably, Darkest Era have a lot of the same sound characteristics as their countrymen, but while Primordial has long had the propensity to do a bob-and-weave with melody, Darkest Era embraces it, which enables The Last Caress of Light to be worth investigating.

Krum has a melodious, albeit pitchy vocal approach, and he’s often the focal point for the band’s folksy compositions. The man does have some memorable moments on album opener “The Morrigan,” as well as “Beneath the Frozen Sky,” which is probably the pick of the litter. The melodic surge that is heard on the sparse Primordial number is in full effect on the aforementioned pair, and it works wonders.

From there, the band keep things right in line with the dark, sub-black metal sound that again, Primordial use at their disposal. The only main difference is that Krum sings

in all clean vocals, while A. Averill employs a barrage of harsh and well-sung vocals. If anything, Darkest Era are able to keep their long and winding song choices hummable because of this, as heard on the lengthy “Visions of the Dawn” and “To Face the Tide.” As a prerequisite, the all-acoustic “Poem to the Gael” serves as a welcome sidebar into the lush and lavish sounds of Irish music. Beautiful stuff.

There’s no mistaking who Darkest Era sound like, and that’s totally fine – Primordial are easily one of the more innovative and instinctive bands

in the underground. We’ll take into account how nascent Darkest Era are, but The Last Caress of Light is a sturdy, tidy album, with the pervasive Irish spring

and spirit ringing true throughout.