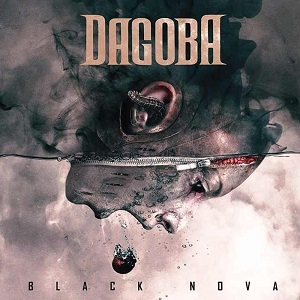 Cyber metal…you’re still hanging around? With Fear Factory left as the only true representation of the style, you’d have to scratch the ‘ol noggin’ and ponder the relevance of France’s Dagoba, a band who tends to generate interest simply because their name is from Star Wars. But really, cyber metal, once intended to be the futuristic advancement of metal has died a pretty unremarkable death, with Mnemic, Sybreed and Threat Signal all sputtering out (Sybreed does have a few good albums to their credit, though). This leaves Dagoba somewhat isolated, although the well-informed folks at Century Media may see something we don’t based on the band’s seventh album, Black Nova.

Don’t sweat the staccato, for it’s not really here. Instead, Dagoba plop down those nimble, post-nu metal riffs, like the ones Strapping Young Lad would have discarded, but are usable here. In turn, their cuts are swift (“The Legacy of Ares”), groove and/or mosh-oriented (“Stone Ocean”) and partially radio-ready (“Lost Gravity”) based on the iffy clean vocals of Shawter, whose real name is Pierre Maille. However, Dagoba doesn’t do anything of these particularly well, preferring to skim off the top of each style, then perform the proverbial mash-up.

It is certainly strange to be labeling cyber metal as being “dated.” However, it quite really is, the product of a slew of once-promising bands never being able to get over the same hurdles that Fear Factory and Strapping Young Lad traversed. In the case of Dagoba, their new union with Century Media is going to bring them in front of brand-new, unsuspecting audiences, some of which may find Black Nova to be fresh. Those who have already been around the block may think otherwise.