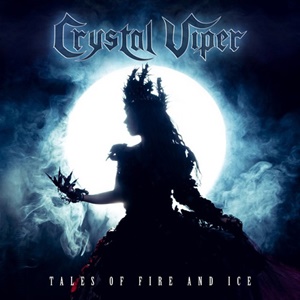 A staple of the Polish heavy metal scene, Crystal Viper arrive at an interesting crossroads with their seventh studio album for Tales of Fire and Ice. Originally delving more into a traditional approach with loads of British and German influences spurring their songwriting and outlook for The Curse of Crystal Viper and the follow-up Metal Nation, the band has consistently strived to improve on all fronts to develop a distinctive niche. Guitarist/vocalist Marta Gabriel possesses a sterling set of pipes to differ from the more prominent ‘siren/symphonic’ approach popular from many female singers in the symphonic or gothic genres, but it seems like in many aspects of this record there’s been a shift to commercialize or incorporate some of that Battle Beast-like charm to soften aspects of the band – which could lead to possible dissension from the long-timers used to the band’s conventional old school wares.

The dance-groove “Ballroom Blitz”-ish aspects in unison with the mid-tempo guitar riffing puts “Bright Lights” on notice immediately, Marta following much of the energetic hook in a rhythmic manner – while the Judas Priest-ish twin rhythms against the keyboard swirls for “Still Alive” make you feel like you are seesawing between Painkiller and Sabaton for comparison’s sake. The reliance on keyboards as the main foundation musically for tracks like “Neverending Fire” and “Tears of Arizona” steps away from the traditional veneer the band established – but fortunately there are other cuts on the second half of the record such as “Tomorrow Never Comes (Dyatolv Pass)” and the double bass/speed chugging “One Question” that provide proof that the band can still muster up the metal and high octane melodies/hooks when they want to. Depending on the version of the album you get the bonus covers differ – for this CD promo, we get “Dream Warriors”, the classic Dokken track from the Nightmare on Elm Street movie franchise, and it’s done with grace and tact – Crystal Viper excelling in capturing the pristine nature of the lower to higher vocal ascension and tremendous lead break.

This scribe has mixed feelings regarding the slightly commercial/keyboard-oriented focus on some of these songs, as if audiences will accept hearing some Judas Priest/Running Wild style tracks at the same time as feeling like Sabaton/Battle Beast entered the fold for a dynamic reprieve. Approach cautiously, as this may signal a permanent shift in Crystal Viper to remember.