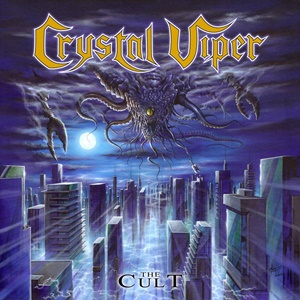 Master Polish metal act Crystal Viper have been delivering their brand of heavy/power metal since 2003. Through their seven previous studio albums they’ve consistently refined and evolved as a band sonically – longtime followers have their favorites (Crimen Excepta and Queen of the Witches for this scribe) and an occasional average outing (2019’s Tales of Fire and Ice a little too commercial/keyboard-hook laden) in the mix. Finishing their deal with AFM and jumping to Listenable Records, The Cult represents another new beginning, including the addition of the multi-talented Swedish musician Cederick Fosberg who is the latest drummer in the ranks.

Following the atmospheric “Providence” keyboard-oriented instrumental intro, the ripping, spider-web guitar harmonies from Marta Gabriel and fellow axe compatriots Andy Wave and Eric Juris elevate the title track to Maiden-like meets Teutonic power spirit – Marta hitting some soaring eagle-high notes during the chorus while the instrumental shifts have time signature propulsion that piques dynamic interest. Throughout the record the quintet reaches back into more classic metal references, be it through subtle triad Dio-era Sabbath licks and doom-pacing through “Whispers from Beyond”, cultural Running Wild-like textures within “Sleeping Giants”, or quieter, clean activities that build out into the NWOBHM meets Hammerfall heavy steamroller “Asenath Waite”. Ced as a drummer gives the band a lot of versatility, knowing when to hit the accelerator on his fills/double kick abilities and settle into proper metal mechanics – he has a bit of Riot-oriented impressiveness during “Down in the Crypt” while living up to the Mikkey Dee fluidity during the King Diamond cover for “Welcome Home”. Overall Crystal Viper appear to stride into familiar territory as far as their love of classic metal and US/German power influences – eschewing many of the last record’s modern aspects in favor of fist-waving heavy riffs, solid vocal melodies, fluid/ speedy lead breaks and intense harmonies at a variety of mid-tempo to slightly faster paces.

These are active times for traditional heavy metal artists and their offshoots. Crystal Viper fires on all cylinders with a magnificent effort for The Cult – proving their creativity and execution are on par with the legends of the business and deserve your time and attention while you bang thy head and scream your face off.