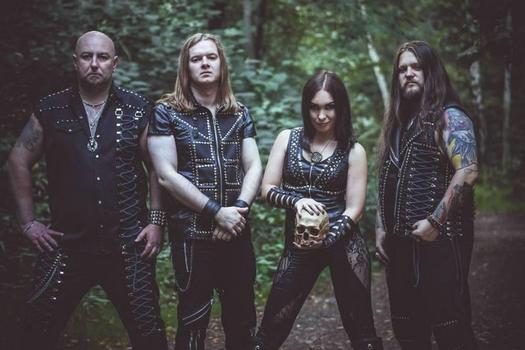 When looking at the Polish metal scene, most ardent followers probably know of the extreme sub-genre of death/black bands led by the work of Vader and Behemoth who have elevated themselves to headliner status in most parts of the globe. Lurking in the shadows though, the steady work of traditional metal band Crystal Viper remains a bright spot for the scene – together since 2007 and steadily releasing a crop of albums that give hope to those who miss multi-octave melodic vocals, strong power riffs, elevated lead breaks, and hooks that can capture the feel of the early to mid-1980’s.

Coming back after a prolonged three year plus absence, their sixth studio album Queen of the Witches continues the conceptual theme the band prefers for the past couple of records, serving up a variety of speed/power offerings, mid-tempo fist bangers, as well as the occasional ballad or two. Never afraid to also showcase their influences and heroes by being a part of the record in guest or cover form, Crystal Viper embody a lifelong passion for heavy metal – regardless of what’s in fashion or stylistically popular.

Arranging a Skype interview with vocalist/guitarist Marta Gabriel, you can tell she’s very excited to be back after the health issues that necessitated a break for Crystal Viper. In this talk we handle the outcome of her surgery, the guests/covers for the new album, how the band views videos these days, and special memories surrounding Saxon, Iron Maiden, Hammerfall, and Black Sabbath – so prepare to get your feel of this fine Polish metal act.

Dead Rhetoric: Dealing with health issues which put the band on hiatus for a few years, did worry ever set in that you would have to end your career in metal – or did you use this as fuel to get back on solid ground as quickly as possible?

Marta Gabriel: You know, I decided to do everything, literally everything to be able to sing again, because that was the main problem with my voice. It took me some time, and we didn’t really know until the end with the surgery if it would resolve the problem, and thankfully it did. Even if I wouldn’t have been able to sing, I’m still a composer, I’m a pianist, I play guitar, and bass guitar. Even if I’m not able to sing one day I’m still able to do other things.

Dead Rhetoric: Would you say your voice is stronger now after the surgery?

Gabriel: Well, I don’t know if it’s stronger, but for sure I sound better than the recording sessions for our last album Possession. Maybe it’s stronger, for sure it’s better right now. Especially in comparison to the previous few years.

Dead Rhetoric: Queen of the Witches is the latest record – how does the process come together when you decide on a conceptual theme, is it story first, music second- or do you work on both hand in hand to make things as tight as possible?

Gabriel: Every time when I work on music, it’s different. For example, at the moment music starts playing in my head, it means that the song is coming. After I have the song I try to write matching lyrics to the music. Another time I will have an idea for a story or a concept- and when I think about this concept I’m using my imagination, creating pictures in my head. And then music starts playing, a soundtrack that is coming out of my head. It’s hard for me to explain this, I call it a musical schizophrenia. It may sound weird but this true. It’s never that I sit with my instrument and try to create something. When I work on music it comes out very naturally- I can be inspired by anything. When I work on a concept album, the music must reflect the lyrics, and the opposite is also true. It’s always different, it depends on the moment and the influences.

Dead Rhetoric: How did the special guest appearances with Ross the Boss, Mantas, and Steve Bentley of Saracen come to mind – and how does it feel to get the chance to play with some of these legends of the classic, traditional, power metal world?

Gabriel: How does it feel? It’s fantastic. Besides being musicians, we are huge fans of course of heavy metal. When you have the possibility to work with your idols, there are no words to describe that feeling. About inviting them, it’s a tradition that we invite musicians from bands that we like and respect as guests on our album. Saracen, Manowar, and Venom, they all have a huge influence on our band and style- we are huge fans of those bands. We decided to invite Ross the Boss, Mantas, and Steve Bentley to join us. Of course, they could have refused, but they are great guys- and I also think they enjoy doing this. With Ross the Boss and Mantas it wasn’t difficult because we’ve known each other for some time, the different thing was with Steve from Saracen because we’ve never met and didn’t know each other. We contacted him and sent him a demo version of the song – “We Will Make It Last Forever” as a duet with myself. That was fantastic that he agreed to do this because I’m a huge fan of his voice, and his style of singing. You should have seen my face when he said yes! (laughs). That was really something amazing for me.

Dead Rhetoric: It’s interesting that you decided to have separate bonus tracks for the CD and vinyl versions of the record – tell us your thoughts on choosing Grim Reaper’s “See You in Hell” and Exciter’s “Long Live the Loud” for these different editions?

Gabriel: We decided to put those bonus tracks, a different version each on the CD and the vinyl versions because there are a lot of people who are buying CD’s and vinyl at the same time when an album comes out. So, we wanted to do something to have something unique and special. We are always recording cover songs, this is another tradition for the band like inviting special guests. After we decided to record one cover song, we thought it would be great to record another cover song and put it on vinyl. A different bonus track and we thought it would be a cool idea to do such a thing.

Dead Rhetoric: Discuss the importance of having such a supportive husband in Bart, who also juggles many responsibilities in the metal realm beyond being a great producer for Crystal Viper?

Gabriel: He’s always been a very special person for me. He’s my husband and so on, but with music he supports me with everything from the very beginning in everything I do, he helps me. He’s also a fantastic producer – he understands music and musicians first. He’s not try to change you or make you fit to current trends- he knows what the musician’s intentions are and afterwards, he’s also developing high quality for the whole album. I love working with him, he works with so many different bands. He’s a fantastic manager- I cannot imagine working with someone else. Besides being a producer and manager, it’s a fantastic feeling for me to share my biggest passion, with the person I love. I think I’m very lucky in this case.

Dead Rhetoric: Which is tougher for you: singing or playing guitar, especially considering the style of multi-octave vocals you employ in the band?

Gabriel: I would say that singing is one thing and playing an instrument is the other thing. At the beginning when I started guitar in Crystal Viper, it was very difficult for me to learn playing guitar and singing at the same time, It was something different compared to the piano, because playing piano and singing is very natural for me. When I started playing guitar it was totally different- but when you learn it once, it’s like riding a bicycle. When you learn it once, you can do it for the rest of your life. I wouldn’t say it’s difficult- the only thing is I’m kind of short and the guitar is kind of heavy (laughs). The only thing is when we have to play a longer live show, the guitar hangs on my neck and I feel it. But playing and singing, it’s not really that difficult for me – it was in the past and I got used to it.

Dead Rhetoric: You’ve released two videos for the new record – what are your feelings on the video medium these days compared to the early Headbangers’ Ball days, do you think this is as important for promotion in the social media driven marketplace?

Gabriel: It’s hard for me to tell you anything about Headbanger’s Ball because when it was most popular in the past, I was too young. I never saw this program- but releasing video clips I think is the best possible way to promote a band at the moment. Of course, it’s kind of expensive, but it’s worth it to do this. For example, I’m that kind of a person who wants to watch music videos. When I was younger I was watching video clips on MTV or here in Europe we had a cable channel called Viva, a German music channel. There was also Viva Rocks, and even now I love to see music videos on YouTube. It’s a great thing to not only hear the music but also see the musicians performing the song in the video – it’s the same with live shows. I think music videos are very important to be visible. If we would have the possibility we would do video clips for all of our songs, but we don’t so I think these two videos are enough.

Dead Rhetoric: How would you describe the Polish metal scene currently – is their healthy support for bands, venues, promoters from the fans not just for the international bands but also the local up and coming acts?

Gabriel: I think that the Polish metal scene is doing well. It’s not as good as in Germany for example, we don’t have as many live shows as in other countries in Europe. It’s good, there are still new young bands coming out, and we have some venues of course. The promoters and fans are supportive for bands that are playing here. What is kind of weird here in Poland is the most popular bands are the more brutal kinds of metal, black metal and death metal. We have two huge bands coming from Poland, Vader and Behemoth, they are worldwide known bands. So maybe this is why these genres are so popular in Poland, we have many more smaller bands that are playing in this genre. With Crystal Viper, we are kind of exotic because classic heavy metal and melodic metal is not very popular in our country- but I believe that will change in the future. There are still some younger bands that are fantastic that are coming out playing melodic heavy metal. It’s not bad.