Cradle of Filth – The Manticore and Other Horrors (Nuclear Blast Records) 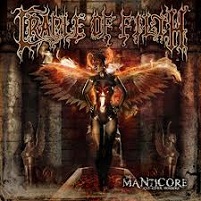 Like clockwork, Dani and his merrymen keep on churning albums out, doubling the productivity of long-time rivals Dimmu Borgir, Immortal, and Satryricon. However, productivity doesn’t always translate into lead dog, for the sort of ramp-up/build-up/excitement that used to predicate a Cradle of Filth album isn’t quite there for their tenth release, The Manticore and Other Horrors. And it’s not like their shtick or anything has gone sour…perhaps people aren’t as warm to COF as they used to be.

Like 2010’s workmanlike Darkly, Darkly Venus Aversa, The Manticore and Other Horrors has a similar extreme metal flourish, pushing the orchestrations to the back, making the guitar tandem of Paul Allender and James McIlroy the point of focus. Allender, who has steered the band since 2000, once again pulls from his bottomless bag of riffs, most of which are of the down-and-dirty variety, specifically “Manticore,” which also pulls in some Middle Eastern instrumentation. Lead single “Frost on Her Pillow” is perhaps the top riff tour-de-force of the album’s 11 cuts, with a fleshed-out melodic riff interval in the chorus that hones in on the band’s late 90’s work.

The only noticeable mutation belongs to the aforementioned Dani Filth, who with every album, sheds more layers off his once-derided/once-lauded banshee shriek. Filth, like Allender in the riff department, is never at a loss for words, something that has long given their music a claustrophobic feeling, but when it’s time to play the verbal spitfire game, there are few better than the pint-sized singer. He’s in top form on “Huge Onyx Wings Beyond Despair,” which is one of the few songs here that calls for vintage COF treatment; the bulk of the album, however, sees Filth transform into a more decipherable vocal acrobat.

The Manticore and Other Horrors’ sideways punk edge and utter lack of finesse runs in stark contrast to COF’s halcyon black metal/Goth experimentation. Therefore, it strikes one as odd that as more extreme the band has become, the less threatening they are to the BM status quo. The resounding sentiment here is that Cradle of Filth hasn’t done any sort of conforming; it’s more like their adversaries have found other punching bags, while the Brits soldier on, isolated in the impenetrable world they’ve created.