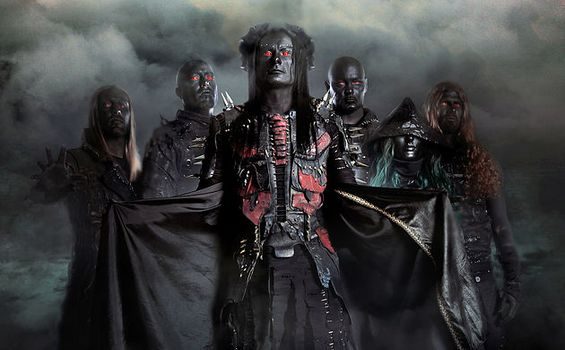 Still riding high from their most recent studio success, Hammer of the Witches, Cradle of Filth managed to keep the line-up intact from said session (you can realize this as more of an accomplishment if you take a look at the number of in and out members over the years). Cryptoriana, the band’s 12th album, sees them going along the path towards the Victorian era, a place that seems quite suiting for the eloquent and macabre act.

While keeping a number of systems in check from last time around (art, producer, etc), Cradle seems much more in a playful point when it comes to their sound. The album is quintessentially the style that Cradle of Filth has stuck with for a long time, but they are quite willing to give it a shot of revitalization. Main man Dani Filth took a few minutes to chat with us about all of those particular things, along with what else fans can expect when Cryptoriana hits the streets later this month.

Dead Rhetoric: Could you talk a little bit about the cover art and Victorian themes for the album?

Dani Filth: The cover art was done by Artūrs Bērziņš, who did the previous album [Hammer of the Witches]. It didn’t seem necessary to change artists. I really liked what he did for Hammer of the Witches. In keeping contact with him, I found out he was also a very good video director. In fact, people were saying he was a better video director than he was an artist. With that in mind, we thought we would put all of our eggs in one basket. We went to his home city of Riga in Latvia and pooled the album artwork budget with the video and photography budgets, and do it all at the same time. It was quite a treat. The title Cryptoriana – the title obviously is a play on words between crypt and Victoriana. It implies, with the subtitle, The Seductiveness of Decay, the Victorian era’s infatuation with death and the spirit world.

The whole album isn’t a conceptual record, but conceptual in the sense that it has a Victorian theme to it. Whether it’s me writing in the vein of ghost writers like E.F. Benson or Arthur Conan Doyle…that sort of thing. Others like Oscar Wilde or Algernon Blackwood. Or it’s literally about the Victorian era. Or it’s, as in the case of “Death and the Maiden,” a story that Victorians adhere to. They were quite into their Greek tragedies, in fact, the literature of that era was part of the gothic revival.

Dead Rhetoric: In listening to it, there seems to a few changes from last time. What do you think was the biggest departure from previous albums?

Filth: The most notable one was that there’s no big, keyboard intro, keyboard outro, or orchestral pieces. This time they have been integrated into the bulk of the songs. We thought that would be a change. We added a choir, with an emphasis on soprano. So it has a very ghostly vibe to it. The songs are decidedly longer than those on Hammer of the Witches. They meander a lot more. There’s some NWOBHM vibes going on – I think that’s just part and parcel of the way we were writing and not a conscious decision to make it more melodic. There’s a lot going on, and it’s got the heaviest track we’ve ever written…maybe not the heaviest ever written, but certainly of late, which is “Death and the Maiden.” It’s a completely different way for us to end an album because it’s very long. I was going to say slow, but it actually speeds up to blast beats at one point – it’s very heavy.

There’s a cover version that appears on the special edition, but I don’t really differentiate between special and normal editions, which is of Annihilator’s “Alice in Hell,” which is something the band has wanted to do for a long time. I know that, for one, we bumped into Jeff Waters quite recently – on three occasions if you count the [past] weekend. I mentioned to him that we were hoping to cover that song, and he gave me his blessing. So that was the main reason. The second reason was that we felt that it worked quite well with the songs on the album, even if it is only on the special edition. There’s also an incorporation of acoustic guitar, which is quite novel for us in a few places.

On the track, “Vengeful Spirit,” we feature the voice of Liv Kristine, who is formerly of Theater of Tragedy and Leaves’ Eyes, and also featured in the Cradle of Filth song “Nymphetamine Fix.” The reason for it was that we felt the song needed something a bit different about it. The producer, Scott Atkins, who again is someone else that we have worked with for the past few records, suggested getting ahold of her again and seeing what she could come up with. She plays a very different character in this song. She plays a vengeful spirit that torments those that wronged her in her life, which is completely different from the character she played in “Nymphetamine.” So there’s a few things that are very different about the album.

Dead Rhetoric: How important is having an on-stage persona that’s a bit larger than life?

Filth: It’s important because it’s recognizable. I just came back from four days at Bloodstock Festival in England. I played on Friday with my other band Devilment. We did a bunch of signings and interviews as well – that persona has gone into Devilment as well, but in a slightly different context. But I think it’s important to have a good stage presence. One very good example of that is I saw Ghost play. It was a great show – very visual and entertaining. That’s what you want!

Dead Rhetoric: You’ve always put an emphasis on high quality merch – is it even more important nowadays given the shift in the music industry?

Filth: I don’t think it’s any more important – it’s always been important, to us at least. Maybe not for other people, but we’ve always worked with really great artists right down the line. We’ve always put a lot of emphasis on lyricism and videos…not that the visuals are any more important than the music is. But if you have the music where you want it, to portray it in other aspects is very important as well. There’s only a handful of things that a band has to think about really. We are just trying to turn our attention to all of them.

Dead Rhetoric: Do you feel that there’s been a high point for the band over the years?

Filth: Depends what you mean by that – if you mean album sales, I guess you can say that Nymphetamine was a high point because we had a Grammy-nominated album and it sold quite a few copies. I always see finishing an album as a high point. There’s a lot of work that goes into each and every record. I think we’ve really achieved something, because with album #12, which doesn’t include bonus discs, EPs, live albums, etc. 20 years – every time you do an album it adds to those years. It’s a bit of a triumph that you keep doing it…or at least it feels like that. I’d say each and every album is a high point. But my favorite time would have to be 2003 where we headlined the B-stage of the American Ozzfest. It was 10 weeks of just having really good times with really good people.

Filth: We have a world tour and the album comes out September 22 on Nuclear Blast. We are going to play Loud Park in Japan. Then we have a 2-3 week UK tour. Then we have a small break, where we might shoot another video. The bulk of the world tour begins mid-January…8 weeks in Europe, which is the most comprehensive tour that we’ve done in Europe I think. We might have a week or two off depending on whether we hit Central America then, but we will come over to the States. We do North America and then to Japan again, then Australia, and then finish up in the Philippines and Malaysia.

Then we come back here, and I don’t really want to know what we are doing because I’ll be completely and utterly fucked by then [laughs]. But I’m looking forward to it – it’s the most comprehensive touring we’ve done in a long while. It’s the thought of our new management, who basically wants to reboot the band. Our previous manager, whom we had been with for 20 years, retired. So with a new album, they want us out doing a world tour.