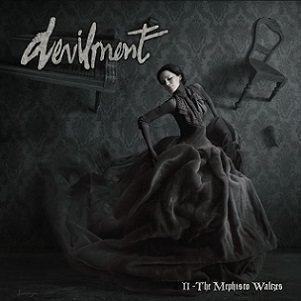 A lot of the black metal consternation thrown Cradle of Filth’s way in the ’90s seems a tad misguided given the ever-overt Goth quality of the band. Like, it was staring people right in the face the entire time. It’s a bit too late to adjust the conversation on CoF’s standing among the tried-and-true, and Dani Filth’s Devilment side-project isn’t going to help. Unabashedly Goth with the necessary symphonic and heavy flair, Devilment will get its share of face-time because of Filth’s involvement, but the band’s II: The Mephisto Waltzes can certainly carry its own weight.

Filth tends to get a little out of control in his main band, with the occasional inability to just let the music breathe. In Devilment, he’s not the dominant force, nor is co-vocalist Lauren Francis, whose keyboard arrangements are often song highlights (“Hitchcock Blonde” is especially enticing). The two often play off one another, resulting in songs with obvious distinction, like the prowling “Under the Thunder” or syncopated, somewhat modern “Life is What You Keep from the Reaper,” far and away the most ‘modern’ of the nine cuts on display.

The target audience is certainly there for Devilment’s taking. (Read: Cradle of Filth’s sizeable fanbase) Frankly, II: The Mephisto Waltzes defies expectations, unfurling a bundle of heavy, swinging songs with a slight commercial/pop edge. It’s almost like if you took the extreme, over-the-top, cacophonous angle of Cradle, sharpened the edges, cut the song corners, and toned Dani Filth down, then Devilment is what you’d get. A welcome surprise all the way.