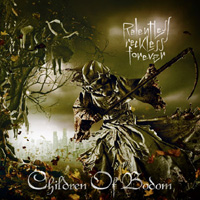 Riffs, man. They’re everywhere here, and it’s a bit of a surprise considering how bland Blooddrunk was. Alexi Laiho and the boys have totally righted the ship on Relentless Reckless Forever, an album that sees Bodom at the top of their game, perhaps giving previous gems like Hatebreeder and Hatecrew Deathroll a run for their money. As such, this doesn’t involve neo-classical shred, nor does it employ the jagged melodic front of Hatecrew; rather, Relentless spews catchy, sometimes technical, but always effective riffs from every alcohol-soaked orifice. Simply put, it doesn’t quit.

In spite of Laiho’s vocals being buried in the mix (as in, they’re sometimes barely audible), Bodom has retained much of the swing-for-the-fences stance they took on 2005’s solid Are You Dead Yet?, with opener “Cry of the Nihilist” leading the charge. Hard not to be swayed by the bruising mid-section riff of the song as well, which perfectly sets up a guitar dual between Roope Latvala and keyboardist Janne Warmen. “Pussyfoot Miss Suicide,” in spite of its juvenile title, is another winner, with a spectrum icy thrash riffs hovering around a brash extreme metal base, while “Roundtrip To Hell and Back” serves as this album’s mid-tempo rocker, with perhaps the best swath of melodies heard out of the nine selections.

Elsewhere, “Shovel Knockout” is aided by a crisp opening bass groove and melodic chorus, while lead single “Was It Worth It?” and “Ugly” offer more variety and spice in terms of the band’s riff selection. “Ugly” especially, which unfurls a devilish, spiraling riff sequence, resulting in one of the band’s patented keyboard-dominated verse sections, recalling the days of Follow the Reaper.

Not a tried-and-true “comeback” by any stretch, Bodom do what good bands (well, some good bands) usually do after a subpar outing – they rebound.Relentless Reckless Forever is miles away from the band’s early shred-happy days, and it certainly doesn’t try to bottle up the melody-driven Hatecrew period, but it does prove that Children of Bodom are a sustaining force on the worldwide metal scene. This is how it’s done.