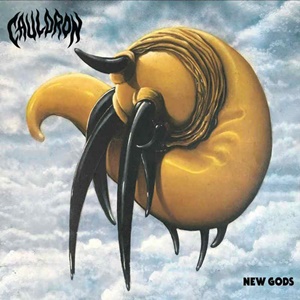 Finishing out their fifth studio album New Gods, Cauldron have handled many literal bumps in the road quite well throughout their decade plus career. Even surviving a scary road accident in 2016 while touring with Enforcer and Warbringer across North America, to the point where they had to cancel the remaining dates as guitarist Ian Chains recovered from broken bones in his neck and back. The trio appear confident to take their brand of melodic heavy metal into whatever direction their ideas take them – which for this set of songs appears to be rooted in more 70’s/80’s AOR nuances.

Listening to the verses/choruses of “No Longer” for instance, there’s this casual reverence to arena rock days when it comes to specific musical licks and multi-part vocal harmonies – certain for audiences to easily pick up and join in the festivities (especially the a cappella section from 3:38-3:51). The darker edge from drum tempo to opening riff for “Save The Truth – Syracuse” makes a transformation during the main verses from a W.A.S.P. style effort into something more in a Lizzy Borden way – before the keyboard-driven conclusion mutates things in a synth-wave of horror soundtrack proportions. You just get a top down, highway cruising ambiance to the vocals and music Cauldron deliver, where the lyrics point out the daily toil and desire to break free, have fun, and gain a little joy out of life. The driving nature of “Drown” reminds listeners that the three-piece still live for that old school metal platform, taking on a Randy Rhoads-like guitar sheen against acts like Malice or early Black ‘n Blue. It’s nice though to hear the band gravitate towards a sub-genre of music like AOR where specific catchy choruses or hypnotic, uplifting music sequences make you think of Triumph or Autograph, such as second half favorite “Together as None”.

While the previous In Ruin exposed more of the band’s NWOBHM meets early American affinities, New Gods differentiates itself because of those outside of metal realm aspects. Cauldron maniacs will welcome the slight melodic shift – and it could bring a few newcomers to the fold.