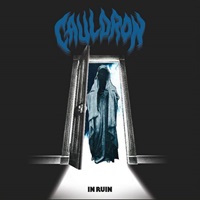 Fortunate to grow up during metal’s worldwide ascension in popularity for the 1980’s, this journalist is thankful that three decades later there are younger Canadian groups like Cauldron flying the flag for those times album after album. Already gaining acclaim through their debut Chained to the Nite and its 2011 Burning Fortune follow up, the trio’s fourth album In Ruin seems to be long in waiting considering the three years plus between releases – but we’ll chalk things up to the band’s relentless touring activities and probable behind the label shuffle scene that has The End Records enter the fray.

The 9 songs under inspection continue Cauldron’s outlook on synthesizing the best NWOBHM-oriented riffs with tempos and hooks that align well with that 1982-1985 traditional metal scene bursting from the United States (especially California). Old-timers will close their eyes, open their ears and think early Dokken meets Leatherwolf for the main Ian Chains guitar riff on “Hold Your Fire”, while bassist / vocalist Jason Decay leads with a potent low end attack on the catchy, sinister “Santa Mira”. Certain songs possess that raise your fist in the air, scream and shout to the music quality right out of the gate – here’s hoping that “Corridors of Dust” becomes a Cauldron set staple because it’s Angel Witch meets melodic Accept bite deserves repeated airings.

Primitive production values keep the three-piece sound very lean and mean – there may be occasional added guitar harmonization or acoustics to flesh things out (giving the epic “Delusive Serenade” that depth of texture the best instrumentals from Iron Maiden to Metallica deliver), but for the most part what pours out of your speakers is how you’d imagine Cauldron live – just louder. Sure “Outrance” contains the infamous “We Rock”/Dio music hook that lifers treasure – and Jason’s vocal range isn’t going to meet traditionalists approval as he isn’t Halford – but In Ruin is all about focus and fun while preserving the purity and sanctity of metal at heart.

Gaining street cred from all corners of the globe, the forthcoming North American trek with Enforcer, Warbringer, and Exmortus should cement Cauldron’s reputation as holding up the 80’s ideals loud and proud.