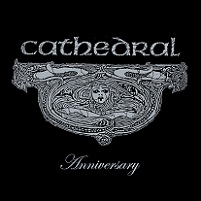 Currently making preparations to bow out gracefully next year with their last studio album, British doom legends Cathedral are making their final moments count, capturing a retrospective 2010 live show on Anniversary. Anniversary is split into two discs, the first being a complete live performance of the band’s seminal Forest of Equilibrium, the second a full set of current and old classics with the band’s present-day lineup. All the more reason for singerLee Dorrian to bust out that imitable doom croon of his more time, perhaps.

Live albums tend to be a bit dodgy (as our British friends would say), yet credit the band for keeping the sound crystalline on Anniversary Throughout the Forest of Equilibrium set, guitarist Gaz Jennings’ harrowing guitar tone bristles with clarity, making those creeping and lurching doom riffs on “Ebony Tears” and always-killer “Soul Sacrifice” sound as formidable as they did back in 1991. An album that is best played in full, Forest and its harrowing web of sonic splendor, coalescing on the final “Reaching Happiness, Touching Pain.”

The second disc (which goes under the title of Freak Winter) culls from all Cathedral’s catalog, with fun and upbeat “Midnight Mountain” and “Carnival Bizarre,” (love Dorrian’s vocals here) leading the surge. In fact, Dorrian’s voice seems to be much better suited for the band’s latter-day era, eschewing the basic one-tone spew heard on Forest. The set closes with live staple “Hopkins (Witchfinder General),” long considered the band’s trademark song.

A real treat for the long-standing fans of Cathedral, Anniversary is the proper segue into the band’s forthcoming final studio album, which should be out at some point in 2012. In the annals of extreme and doom metal, few bandshave been as important as Cathedral, not withstanding Dorrian’s well-respected Rise Above Records as well. Shall be sad to see the Brits call it a day.