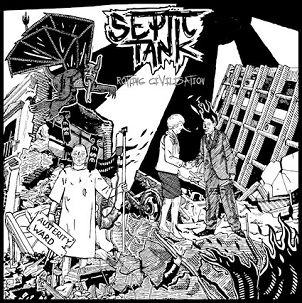 The type of off-the-cuff, rambling record that speaks to an era that is now long gone, Septic Tank’s Rotting Civilisation is the result of patience — 20 years of it — along with some cagey metal vets getting some cranked punk/hardcore out of their system. Featuring former Cathedral vocalist/Rise Above honcho Lee Dorrian, ex-Cathedral guitarist Gaz Jennings, Repulsion (and also ex-Cathedral) bassist Scott Carlson and drummer-producer Jamie “Gomez” Arellano, Septic Flesh rattle off a spitfire, older, but nonetheless still angry 18 songs, all done in a perfunctory, no fooling around nature.

Quick songs here, as you would expect, with the band darting through these cuts like they’re in a rush to get to the next one, all the while, there’s Dorrian, his identifiable cackle running through these songs like a red line pointed at the corrupt. The lyrical content is very much socially-aware, with “Social Media Whore” and “Digging Your Own Grave” getting the most action, especially “Digging Your Own Grave,” which wouldn’t veer too off the course from Morbid Tales-era Celtic Frost. Then again, all 18 cuts sort of ransack the whole place, whether it’s hardcore pounding (“Who”), punk crisscrossing (“Fucked”) or even the quick grindcore bursts on “Danger Signs,” taking Dorrian all the way back to his very early Napalm Death days.

Really, not much more to it than this, with the Septic Tank dudes no doubt glad to finally have this out in the open, padding their already strong and significant discographies. And hey, given what’s going on in the world, who’s to say they can’t round up for another batch of tunes just like the ones on Rotting Civilisation?