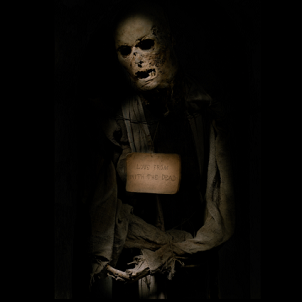 So dour and dark is With the Dead, you start to reflect back on Cathedral’s “boogie doom” days when they were more about mind-altering substances than grim, ashen sounds. The Cathedral reference is tied to frontman Lee Dorrian, a veritable scene-starter and person of vast influence, who, in fronting Cathedral from 1989 to 2013, cast a net from gloom-doom (Forest of Equilibrium) to the aforementioned odd-man patrol (Supernatural Birth Machine). While these sound alterations kept Cathedral’s career afloat, it appears Mr. Dorrian is most at home with this style of no-sunlight doom, as reflected on With the Dead’s sophomore Love From With the Dead.

Joined by former Electric Wizard bassist-turned guitarist Tim Bagshaw, ex-Cathedral bassist Leo Smee and former Bolt Thrower skin-basher Alex Thomas, With the Dead marauds like one of those ungodly heavy sludge bands from this side of the pond. The main difference, really, is Dorrian. His bark-shout as predominant as ever, Dorrian treads some familiar terrain here, notably on the crushing “Isolation” and in particular “Reincarnation of Yesterday,” which finds the venerable throat giving it his all with emphatic shouts and voice-work.

Certainly heavy in matter and execution, Love From With the Dead is a tidy follow-up to the band’s 2015 self-titled debut, an effort that bears quite a few similarities to this one. Nevertheless, you may want to sleep with the lights on, keep your head on a swivel and not talk to strangers…With the Dead’s soundtrack of forbearance has no light at the end of the tunnel.