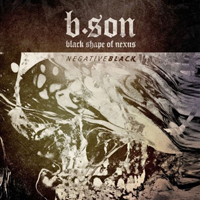 Talk about digging into the depths of memory with this one. Several years ago when Myspace still had at least some cultural relevance, it was a happening place to discover new music and connect with smaller time bands in a very intimate way. For Black Shape of Nexus (BSON) this was certainly the case, as they friended me on the grounds of two of my interests at the time: Khanate and Sunn 0))). At the time the band was still nascent and very much in a demo stage and managing a threadbare survival through this face.

Admittedly, the hyper-inflated rawness pervasive in their sound and song writing at the time wasn’t to my liking. So in time Myspace (at least for yours truly) came to an end and in turn so did my running knowledge of BSON. In having them fall into my lap for this review memory took in and shock followed, the intervening years had been kind to the band. Like rekindling a relationship that never quite got off on the right foot but they’re happily willing to go again and surround you with love. Crushing, oppressive, doomy love that is. Negative Black is an absolute monster.

Feedback-drenched noise and brimming with a super-thick bass-line it’s immediately clear that BSON means business with opener “ILLINOIS” (…yeah, I have no idea on the title). Neither the sense of groove nor the penchant for noise overlays subside as the band rolls through Negative Black. Album centerpiece “10000 µF” starts off as the album’s fastest track, even then a lumbering tribal boom billowing out before the track finds a gradually cascading slow-down that persists over the latter half of the song’s 20-minute duration, eventually suffocating all life around it with sheer weight and oppressive thickness.

“14d” immediately follows with an absolutely consuming slab of southern-tinged riffing, the black steamroller of a song conjuring Warhorse at their absolute finest and wrecking everything that is put before it, echoes of “Lysergic Communion” (from 2001’s As Heaven Turns to Ash) everywhere in the song – stunning. The songs on the album usually fill one of two rolls, crushing outright (both aforementioned songs) or functioning as groove-laden ‘soundscapes,’ instrumental “RMS” and the other 20+ minute track “NEG. BLACK” showcasing this alternative path.

Sometimes when rediscovering a band that had been lost to your musical consciousness for a few years the results can be more than disappointing (In Flames and Hatebreed both come to mind). The case here is fortunately radically different, the young and disjointed band once known being replaced by an absolute juggernaut of a drone/doom group, well versed in what it wants to create and how exactly to create it. At a few seconds shy of a full 80 minutes,Negative Black is in no way an easy listen, whether taken in one sitting or broken up into several. What it is however is rewarding, and for the time invested it will pay off several times fold, revealing it’s many dark and suffocating layers on a slow-release timer, making sure it savors every moment of misery it exacts from the listener. It’s scary to imagine where the band will go from here.