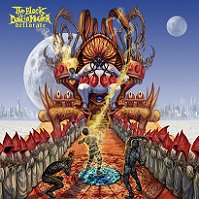 As is the case with most North American death metal bands

, album #4 is where stagnation sets in…kinda like making that big indentation on the couch with the means of never moving (ref: Cannibal Corpse, Obituary, etc.). Deflorate does bristle with the type of tenacity that only BDM can bring, but it feels like it’s re-packaged from 2007’s Nocturnal. Line the two albums up next to each other – they’re practically spitting images.

Ten tracks here, all of which are off-to-the-races, Scandinavian-infused melo-death, allowing drummer Shannon Lucas to demonstrate his considerable skills. Lucas dominates tracks like opener “Black Valor,” lead single “Necropolis” and unstoppable Eyes of Thousand.” Clearly most of the album was written with this drum-shred skill[z] in mind and there’s little, if any room to breathe.

We should probably back off the melodic death metal tag, as Deflorate doesn’t take on any real melodic shapes. Rather, we get quick snippets off it on “A Selection Unnatural” and album closer “I Will Return,” which is new lead guitarist Ryan Knight’s (ex-Arsis) platform to shine – and he does. A very good pickup for the band, now making the lead guitar

department a strength where it was once a weakness.

No one can find fault with BDM’s attempt to keep up with the Death Metal Jonses of the world. In fact, they’re in that very small upper-tier group of DM bands worth following, but Deflorate – while no means a disappointment – is the band’s The End Complete or Once Upon A Cross. Good albums, yes, but hardly career statements. That’s what album #5 might need to be reserved for…