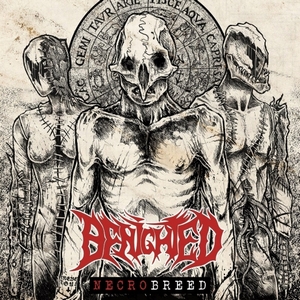 There are some bands within the metal scene that can be reliably called upon to offer some of the extreme’s most intense and frantic offerings. Benighted have long earned a spot on that short list, utilizing an energetic burst of extreme metal with each release. The band’s eighth release to date continues their gold standard in pushing the envelope, even if it comes with little surprise in its execution.

A three year period has followed since Carnivore Sublime, but that shouldn’t surprise long-time fans in the wait. Nor should the overall attack patterns of Necrobreed, although its clear that this album is meant to solidify Benighted’s place in the archives of brutality rather than feel like a repeated exercise. Upon exiting the eerie intro (a seeming tradition in itself), “Reptilian” rapidly kicks down the accelerator, which doesn’t relent much for the next 38-ish minutes. Grind influences, thick grooves, staggering drumwork (this time by new drummer Romain Goulon), humorous/creepy samples galore, and Julien Truchan’s impressively varied vocal arsenal (check out the underwater-esque gurgles of “Leatherface”) lead the way, with no less precision and knock your socks off fancy than what you’d expect. But there are always some curveballs that the band delightfully lays out, and the few moments of haunting atmosphere and slick melodic grooves in “Monsters Make Monsters” and blackened hue to “Mass Graves” are only two examples of how the band enjoys shaking things up. The ultimate goal of Benighted is that of explosive energy, and Necrobreed certainly has no shortage of it, with the added perk of a strangely accessible side that will bring you back for more, repeatedly.

While it seems to be a faster and more streamlined version of Carnivore Sublime, it doesn’t detract from the overall menace and fury that Necrobreed generates. Catered to long-time fans, but for those yet to seek out the French act, there’s certainly no better time to start investigating than the present.