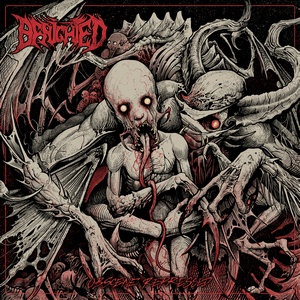 Benighted have been a staple of high quality within the extreme music scene for quite some time, especially with more recent releases such as Carnivore Sublime and Asylum Cave. There’s just something to the level of musical insanity that Benighted that can pull off that is never short of being impressive – that combination of death metal brutality and grindcore adrenaline. While Obscene Repressed doesn’t really go too far outside of what Benighted has done for ages, the level of polish is razorsharp and consistently compelling.

Keeping on with the tradition of jostling the listener right off the bat, the title track opens eerily quiet and grabs you by the throat with an all too intense scream before dizzying riffs and blastbeats join the party. This is happily welcomed back after Necrobreed’s ratio of death to grind falling more towards the deathly. The band’s explosive speed is on full display, and it makes for some blissfully bludgeoning contrasts when they immediately leap from full-on blastbeats to thick death metal grooves (“Scarecrow” will knock you backwards). But it’s also important to note that it somehow stays ‘catchy.’ It’s not that the band haphazardly tosses together tracks, but there’s a method to their madness in that gives the tracks some ominous melodies during high speed, and some memorability to the groove – just take closer “Bound to Facial Plague” in and it’ll stick with you and compel you to hit play once more.

The need to experiment and toss in a few left turns still takes some precedence too. For instance, “Muzzle” violently stomps through much of its short runtime, but not without taking a few seconds to revel in some floaty, almost jazzy moments in its center before jumping back to hyperspeed. And what would a Benighted release be without some guest vocalists, and Obscene Repressed is happy to oblige, notably with the groovy “Implore the Negative” being given some hardcore credence with vocals from Jamey Jasta and “The Starving Beast” being a battle for brutality between Julien Truchan and Cytotoxin’s Sebastian Grihm. Not that Truchan truly needs much help, with his usual bag full of vocal variety in full-swing, going into rather inhuman sounds over the course of the album.

Obscene Repressed gives Benighted fans exactly what they crave. It’s loaded with spine-tingling speed runs, stomping grooves, uniquely perverse lyrics, and a variety of disgusting vocals. Few in the extreme can really match Benighted when they come rushing in at full-tilt, and Obscene Repressed is one more reason why they are one of the genre’s most abrasive yet infectious acts.