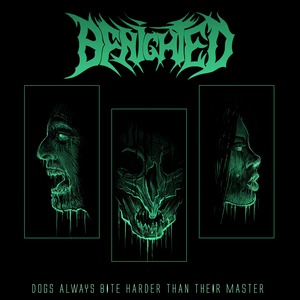 Celebrating the brutal band’s 20th anniversary, Dogs Always Bite Harder Than Their Master is a compilation of sorts from Benighted. One of those hodge-podge type releases that pool together a little old, new, and a cover, it is sure to be treasured by the most devoted of fans, but doesn’t offer too much to anyone outside of that demographic.

That being said, for an EP, there is a good chunk of material to digest. There are three new tracks to dig into, and all of which stand up to the usual Benighted standard. As a reflection of two decades of existence, everything expected is here in terms of some frantic speed, wicked grooves, and Julien Truchan’s always varied vocal performance. The choice cut may in fact be the slower and more groovy title track, with an atmospheric opening that builds things up, and offers plenty of melody alongside a hearty helping of carnage. Then there’s a cover of At the Gate’s classic, “Slaughter of the Soul.” An odd choice for a band of their level of brutality, but the speed quotient works its way in well to their sound and for what it’s worth, they do a good job of attempting to put their own Benighted flavor on it. Lastly there are six songs that are taken from the live setting. No complaints about song selection (and they feature a variety of guests), and the sound production is spot-on. It all depends on your personal preference towards listening to a few live tracks in the comfort of your own home.

Continually one of extreme metal’s more consistent and enjoyable acts, it’s worth raising a glass to 20 years of Benighted. As stated, it’s not going to grab the attention of those outside the band’s radar, but it works as a solid celebration of everything the band does right.