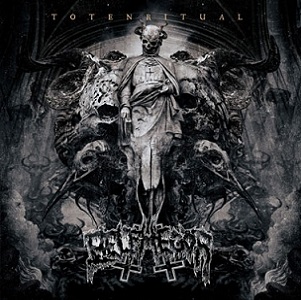 At 25 years and now 11 studio albums, Austria’s Belphegor have reached the point where most extreme metal bands are past their point of usefulness. Look at any number of forerunning American, European or Scandinavian death metal forerunners today — they’re primarily making the nostalgia rounds or split up altogether. Not Belphegor, whose steady ascent from virtual unknowns to respected status is worth a tip of the ‘ol cap. The band’s productivity nor it’s commitment to the extreme, whether it be sonically or visually, has never been in question. It explains why their new Totenritual is another front-and-center face-melter.

The new ingredient is drummer Simon “BloodHammer” Schilling, who is making his first appearance on a Belphegor record. Now, drumming has never quite been the focus of the Austrian’s sound, who have often preferred to let their largely unrestrained and heaving death-on-black motifs do the talking. But with Schilling, there appears to be an increased onus on turning the extremity loose, whether it’s on the nimble “Apophis – Black Dragon” (the chants and subsequent breakdown here are again, savage) and brisk “Spell of Reflection,” Belphegor has shown their need for speed (if you will) and ability to weave evil, nihilistic dynamics has yet to wane.

While there’s no sure-fire show-stopper to be found across Totenritual, it’s an album of unwavering consistency, with the Austrians marching stridently and confidently across and over lesser bands. The staying power of Belphegor, in particular, primary constituents and long-time holdovers Helmuth and Serpenth, is a marvel. In turn, Totenritual’s diabolical savagery is emblematic of a band who continues to defy the odds…and time itself.