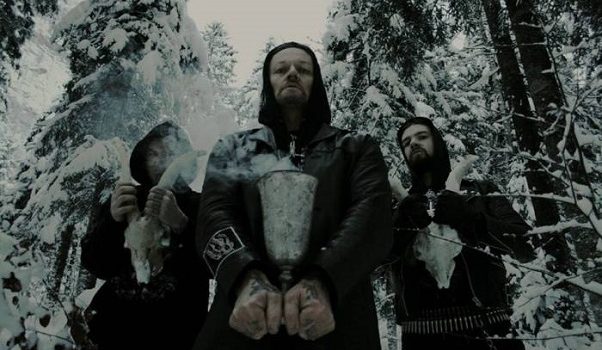 Email interviews are never good for serve-and-volly. General disinterest, poor typing skills or language barriers usually bog down these type of interviews, leaving the responsible scribe to work up some kind of flow. Surely we’ve all read enough interviews featuring stock questions and even more stock answers, ones that offer little to no new information. You might as well copy a band’s bio and plop it into the interview. Not so for Austria’s Belphegor, whose leader Hel “Helmuth” Lehner knows his way around an electronic message interview.

The man’s spirited responses to questions regarding the band’s 25-year career and new album, Totenritual, nearly jump off the page, showcasing a passion that has enabled Belphegor to last this long. Plus, when the man talks about being “drunk as fukk” and mocking “the son ov Christ,” then it’s game on. It also helps that Totenritual is another full-blast blazer from the Austrians, continuing a trend that started with 1997’s unheralded The Last Supper and shows no signs of slowing down…

Dead Rhetoric: I recently spun the Blutsabbath album, which was released 20 years ago. What’s your memories of that particular point in time?

Helmuth: It is unreal that we survived so long and are still here anno 2017. We are stronger than ever before. With each album, our plan is to improve as a band and develop more intense and dynamic sound walls. We remain passionate about all aspects of the creative and performance processes. I remember as we brought the master copy of Blutsabbath by car to Germany and ended up in a bar drunk as fukk. Within the first week of release, we were hit hard by censorship, distributors/ CD shops were returning the albums to the label. This also happened with The Last Supper. We had more trouble, the print company refused to print the cover art where you see the fetus of Jesus cut up into pieces. Probably one of the most bizarre covers ever. The company had to search for another company. The labels back then weren’t that happy about those things, for us it was brilliant to mock people and the son ov christ, and we pissed in the mainstream with those early releases and enjoyed it to the fullest. About time to work on a biography. Hail!

Dead Rhetoric: Do you romanticize that era? You were still a new band and the underground was developing…it seems so long ago.

Helmuth: It was a good era with many varied experiences. The first ten, probably 15 years were rough, we were all about excess and getting rowdy, not even really knowing what was going on. We were fine with playing and getting trashed as often as possible. Everything was different, no mobile, no internet, but all in all I have to say it was more brutal and rebellish and of course more real, and some things were better. You had to fight hard to get your band out there and get shows, sometimes under horrible conditions not even getting catering or transportation money. I think it’s more respectable back when each step of the way to success was more difficult. Belphegor is a different force now, but we still don’t have a manager, marketing people, etc. which I think is important. Each small band nowadays has a manager etc, makes me laugh. Anyways, we are in control a hundred percent and exactly know what we want and it’ll never change.

Dead Rhetoric: You have a new full-time drummer in Simon. What made him right for the job?

Helmuth: Serpenth does tattoo when he is not busy with Belphegor and he inked the band´s logo huge over Bloodhammer’s stomach. That display of dedication made it more clear we wanted to take on the German monster-drummer in the band as a permanent member. He’s 100% metalhead, which is great and a must to me. He plays a very dynamic and technical style. With him in the band, we were able to bring all aspects of our sound to the next level of extremity. Everything sounds more brutal, more possessed and achieved the Ritualistic vibe we envisioned from the beginning of this project through the whole LP.

Dead Rhetoric: Belphegor has existed largely as a full-functioning duo for so long. Is it hard to integrate a new member into your lineup?

Helmuth: We’ve been a duo since 2006 and it was never a problem, on contrary. We preferred it over having someone who wasn’t the right fit. The number of people in the band is not what matters. The thing is, we demand a lot and need to be sure the musicians we bring into the line up are creative, take responsibility and practice consistently. I always stress that we make an effort to always improve our skills. We’ve never had a recording lineup as strong as we do for Totenritual. It feels great and I am very proud of this new LP. It should be noted that I record all of the guitars for the albums since 2006, but we always recruit an experienced session guitarist for live shows, to fire out tracks in the hordes with the uttermost brutality.

Dead Rhetoric: As for Totenritual, it’s another classic blast of extreme metal from you guys. To these ears, the album incorporates all eras of the band successfully. What was the approach going into songwriting?

Helmuth: Totenritual is the perfect representation of Belphegor for 2017. It is the first time we’ve tuned our guitars down to B and A#, which is way lower than we’ve ever done before. When I start a project, I get into the mood for intense practicing. Especially before we enter the studio I practice for weeks and months to be well-prepared. I don’t want to practice in the studio or waste time that should be used for the creative process. For the studio recording, I focus all of my energy on my visions to create something dark and outstanding. Of course, prior to recording, we practice songs in the rehearsal room all together as a band. It felt great to write this eleventh offering, the mood all was good, everyone welcomed the challenge. We never stuck to a particular formula and always try working with new studios, new producers, people etc, to keep the fire burning. I hate stagnation. We added new details to our musick, some songs you need to hear four or five times to discover all we’ve put into them. I would say this is our most vicious album yet.

Dead Rhetoric: With so many albums under your belt, do you ever go back and listen to some of your previous works before writing or even recording?

Helmuth: Sure, here and there I get to listen to it in cars, bars, or when we play shows at venues. Always amazing and sometimes weird to me, because it’s a diary to me and each LP connects me with who I was and what I went through during the time I composed, rehearsed and recorded it. Sometimes I’m impressed when I haven’t heard certain tracks for about five years, or even longer, haharrr.

Dead Rhetoric: “Apophis – Black Dragon” is one of your more striking songs of late. What’s the story behind it?

Helmuth: “Apophis – Black Dragon” the ruler of darkness and chaos, the black dragon, indestructible. He always takes the forms of dragons and serpents. If you look into his eyes for too long you die. He is said to be the oldest enemy of the sun god RA [RE] in Egyptian mythology, born from the saliva from goddess Neth. Vocals on this exalted track are in four different languages, including ancient Egyptian from a book of the dead [Toth]. I’ve been on vacation to Egypt three times. I’ve visited the Giza Pyramids [been inside one, magnificent and impressive, same as I been standing on top of the Sun Pyramid in Mexico. I had the honor of visiting hundreds of magickal places in my life, I could never have done that if I were not a musician and I am thankful for those opportunities], Valley Of Kings, Karnak Temple and Luxor, Museum in Cairo where I saw the mummified Tutankhamun and the golden mask etc. so I know what I’m talking about.

Dead Rhetoric: You’ve been on Nuclear Blast for over a decade now. What’s the working relationship like between both parties?

Helmuth: I don’t want to talk about the industry. I will say that all is good as it is. Nuclear Blast is a great company that makes it possible for us to have a good budget for all I invest in the band, such as studios, cover, video, etc. They also have some great artists on their roster, such as Nile, Danzig, Immolation, Slayer, to name a few. Something important I want to mention: The digipak version of the album comes with two bonus live tracks, both recorded in April this year at Inferno festival in Oslo, Norway with the titles “Gasmask Terror” from the Conjuring the Dead LP and “Stigma Diabolicum“ from Bondage Goat Zombie.

Dead Rhetoric: Did last year’s incident with a Russian orthodox activist help increase the band’s profile? What’s your feeling toward the incident today?

Helmuth: There is a lot of shit currently going on in this world and that always makes for good inspiration for art and musick. Religion is still the base of political power in most countries, and as long as there are sheep, there will be corrupt tyrants intent on leading them. Religion is the most efficient way to control and mold a large number of humans, so I do not see true freedom of expression happening anywhere in the world anytime soon.

It shows me we are doing all right, and I see they take us so seriously, I see them as enemies. We are not here to please everyone, we please ourselves first. If people get it and respect our legacy, what we stand for 24 fukking years, we highly appreciate that. Those people are the reason why we are still here and able to conjure the dead. It’s fine by me if other people are offended and hate us. To each their own. I don’t waste my time worrying about that. It’s their loss, not mine. Besides, I don’t see myself as a victim. I knew better than to attack him and respond to his provocations. It should go without saying that if it happened on neutral ground it would have been different for those degenerates. Thanks to Mr. Karl Sanders of Nile who stood in the way and blocked him. What a loyal gesture from Karl, I will never forget that. Otherwise, everything could have gotten really out of control. And no, this situation didn’t change any part of my life. I just hate and despise their institution even more and we wrote about those kinds of deranged people on the most brutal track on the new album, entitled “Swinfever – Regent of Pigs.” Guess the title says it all and speaks for itself.

Helmuth: Belphegor are unstoppable, kind of like Apophis, we always come back, and will march again and again, touring worldwide for the next couple years, that´s our priority. We dig bringing our extreme signature sound to our loyal supporters and the horde is ever-growing. Each ceremony is challenging, doesn’t matter if we play for 200 or 20.000 people. After the album release, we start with two headliner tours and first tour cover Europe followed by North America crusade in November/December [dates will be announced soon, so keep your eyes open]. From mid September, we will play over 50 rituals until the end of the year. I hope people can’t wait to get Totenritual and support us so that we can continue marching with maximum strength worldwide!