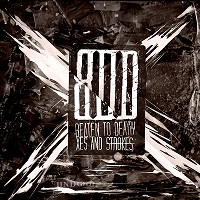 “Melodic grindcore” isn’t a term we bandy about very often, probably because there’s no precedent for it. Being that most grindcore bands have little or no interest in sounding the slightest bit harmonious, the tag hasn’t exactly been dripping from our mouths or keyboards. In any event, Norway’s Beaten to Death proudly champion themselves as such, and as a result, their Xes and Strokes debut is a sure-fire winner. Go melodies!

Patterned after most grindcore albums (read: it gets in and gets out before you know it), Xes and Strokes is a largely organic and frenetic offering, with the band going as far as to recording it live. As a result, the album’s nine tracks have a legitimate punch to them, with the melodic output on “Winston Churchill,” “A Soulless Alarm” and “A Word to the Wise” elevating these songs to another level. It’s this constant push-and-pull between these elements that makes the album click – they’re obvious complements to each other, oftentimes resulting in chaotically beautiful jams, like the aforementioned “A Soulless Alarm,” which could be one of the most satisfying grind “departure” songs we’ve heard in a while.

Almost a grind revelation, Beaten to Death are the perfect anecdote to the scuzz and weed-infested sound of their contemporaries. Xes and Strokes is about as good of a start in recent memory for a new grindcore band. Melodies for the win!